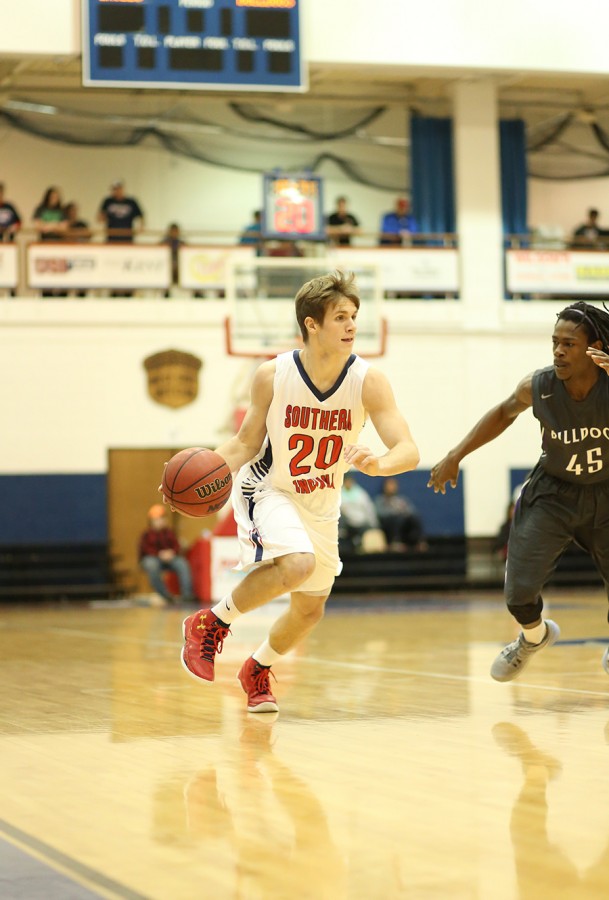 During a game last season, guard Alex Stein dribbles the ball down the court during the first half of a game against Truman State University January in the PAC.

The men’s basketball team came out with its 13th win of the season to keep a perfect record both in the Great Lakes Valley Conference and overall with a 88-71 victory over William Jewell College.

Assistant coach Kevin Gant said William Jewell was able to throw off the team’s offense in the beginning, but once it found a rhythm guys were able to make their normal shots.

“(William Jewell) did a really good job of scouting us,” Gant said. “They knew if they changed tempo or changed the way they guarded a little bit it could bother us and slow us down a little bit.”

When they weren’t making shots the players were working to grab 46 rebounds, 16 offensive and 30 defensive.

“That’s a big number,” Gant said. “That’s a really big number…If you can get hustle rebound or hustle plays it always gives you a chance. ”

Julius Rajala, Taylor and Macklin all contributed nine rebounds. Every player saw time on the court tonight and came away with at least one rebound.

The team also ended up with 21 assists. Both Taylor and Marcellous Washington had four.

He said the players are doing a good job of trusting each other. The don’t care who makes the shot, just that someone does, Gant said.

The defense also showed as the team held William Jewell to 22.7 percent shooting from the three-point line. USI was 42.4 percent from three-point range.

“That means guys were paying attention,” Gant said. “I felt like we were really challenging their shots and making it hard on them.”

At 3:15 p.m. Saturday the Eagles will look to continue their win streak when they play the Rockhurst University Hawks