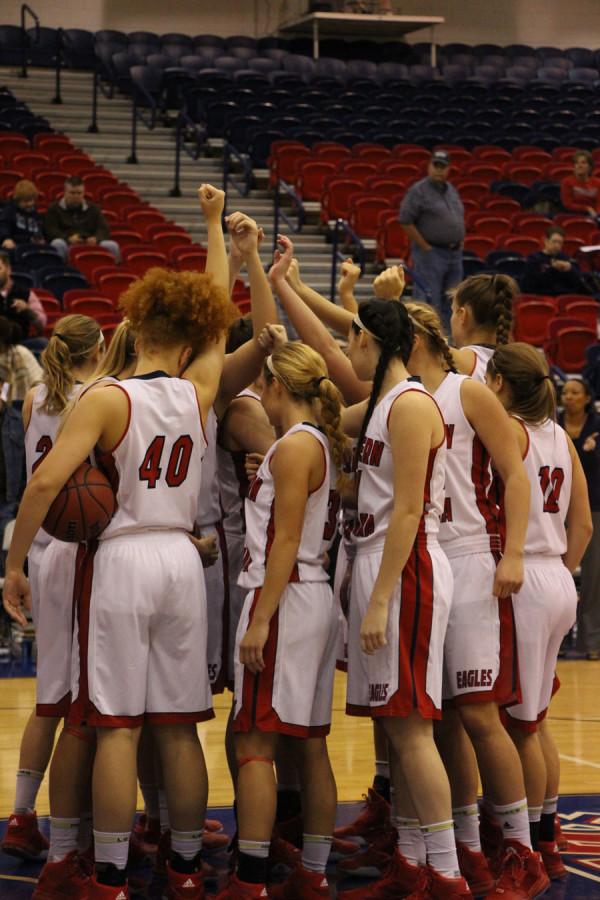 The women’s basketball team faced off against Salem International University during the 2015-16 season.

The women’s basketball team rebounded from its one-point loss last week with an 18-point victory over William Jewell College tonight.

The win brings USI to 11-2 for the year and 3-0 in Great Lakes Valley Conference games.

The team was led by double-figure scoring from Kaydie Grooms (15) and Tanner Marcum (11). Grooms also had four assists and three steals.

The Eagles totaled 22 turnovers during the game, something assistant coach Randa Dallas said is attributed to intensity.

Dallas said the team always expects the assists to turnover ratio to be in positive and she thought the assists could have been better. The team had 11 total. again

The team also ended the night 73.9 percent from the free-throw line.

“The first half we were 9-9. That’s huge for us, we’ve been struggling from the line all year long,” Dallas said. “It seems like a long time, but it’s just every game that free throw line is a struggle for us.”

She said the team has to hit its free throws, but overall she’s proud of their performance from the line tonight.

Dallas also felt the team got back into its defense tonight.

“Our full court pressure is what we love to run,” she said.  “We haven’t gotten into it as well these last few games. We knew we needed to work on some reps this game. We took a little more pride in it today.”

Tonight was also head coach Rick Stein’s 300th win as a head coach for the team.

Dallas said they’d hoped to get that win last week, but they would take it tonight as well.

The next game for the women is Saturday at 1 p.m. against Rockhurst.