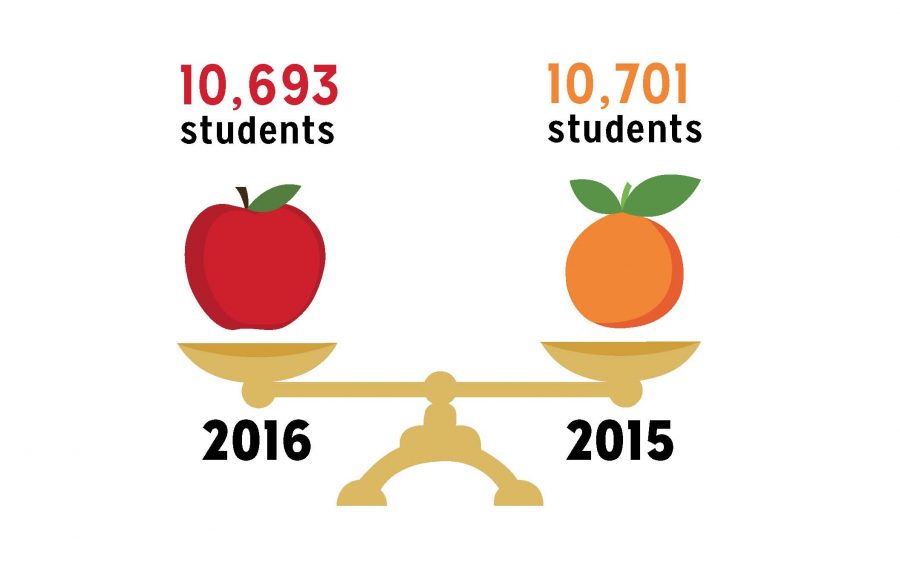 The 2015 enrollment was taken during the first week of the semester whereas this year’s was taken in the fourth week. Therefore the data in the university Fact Book does not allow for direct correlation to find an increase or decrease in enrollment. 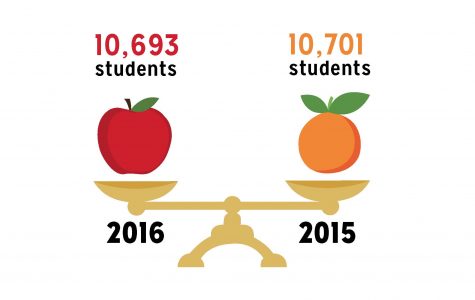 The 2015 enrollment was taken during the first week of the semester whereas this year’s was taken in the fourth week. Therefore the data in the university Fact Book does not allow for direct correlation to find an increase or decrease in enrollment.

When compared to the fourth week data from 2015, overall university enrollment has grown by 28 students.

The enrollment data released this year does not directly correspond with data released last year because it was released at different times.

“We are reporting at a different date now, so if you’re looking at numbers from last year and this year you’ll see in our (news release) this year that we are saying ‘at this time last year,”  John Farless, director of University Communications, said. “So there is some fluctuation at the beginning of the school year that has to be taken into account.”

The 2015 numbers also included an estimation of CAP students and this year’s number is exact.

Farless said that no estimates were made about graduate students in 2015.

“We made an estimate (about CAP students in 2015) that was high,” Kindra Strupp, associate vice president for Marketing and Communications, said.

Strupp said the university now “expects” for the enrollment data to be calculated at the end of the first four weeks.

The University Fact Book lists the 2015 overall enrollment as 10,701 students. It then breaks out CAP students to have the total undergraduate and graduate enrollment for Fall 2015 at 9,029.

“The factbook includes all of our official counts for the semester,” said Katherine Draughon, the executive director of Planning, Research and Assessment.

In an email to The Shield Draughon said the 2015 numbers provided by the university were “point in time” data taken from the fourth Friday of classes so that it could be compared “apples to apples” with 2016.

“Again that apples to apples comparison is important but you’re going to see kind of an apples to oranges comparison when you look at the Fact Book,” Strupp said. “That’s unfortunate because the definition of our time frame changed it necessarily can’t be exactly the same.”

Comparing the fourth week 2015 data to the 2016 data shows that graduate and new-to-college students rose, but undergraduate student enrollment fell.

The number of incoming freshman last year was announced in the press release as “nearly 1,700 first time in college students.”

The average GPA for those students was a 3.37, the highest in the history of  the university.

The university saw a 20 percent increase in graduate students, moving to 1,068 students from 888.

This year is the largest enrollment for the graduate program overall.

The increase is due in part to the addition of the online MBA program offered in the Romain College of Business according to the press release.

“We knew there was a strong need for an accessible online MBA program, but we didn’t foresee how popular it would be,” President Linda Bennett said in a university news release. “With an enrollment of 88 students in its first cohort, the new online degree program has tripled our expectations. We’ve also seen a strong upward trend in enrollment, both new and returning students, across our 14 graduate programs.”

Overall the university has students from 89 of the 92 counties in Indiana represented in its enrollment. There are also students from 36 other states and 74 countries.

Housing is at nearly-full capacity at 98 percent.