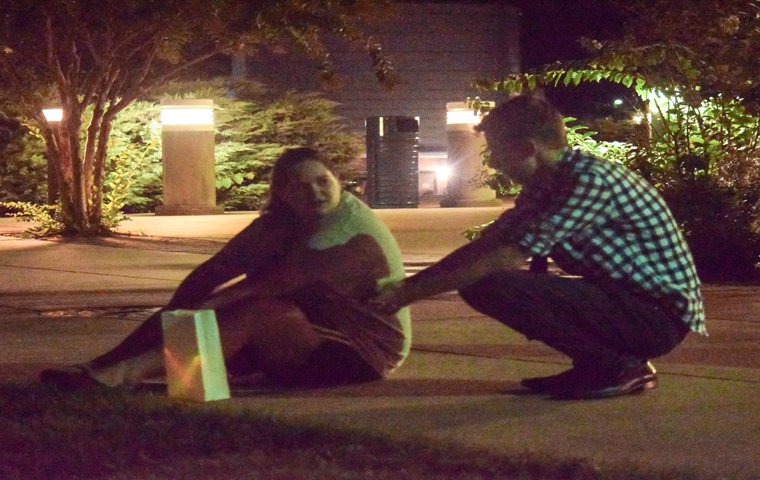 Biggs struggled to figure out how to live her life without those she had lost.

She eventually found the To Write Love On Her Arms’ organization, which helped her learn to live with the deaths of her high school classmates.

To Write Love on Her Arms is a non-profit movement dedicated to presenting hope and finding help for people struggling with depression, addiction, self-injury and suicide. TWLOHA exists to encourage, inform, inspire and also to invest directly into treatment and recovery.

Last Wednesday, the campus TWLOHA organization hosted its annual National Suicide Prevention Day Candlelight Vigil. The vigil is held to remember those who died due to suicide and those who struggle with it still.

“When you lose somebody to suicide, that’s never a happy situation,”  the vice president of To Write Love on Her Arms’ youth council said. “It’s tragic, it’s sad and it doesn’t eradicate the pain. It only spreads the pain to everybody else. People have to now reformulate their lives without that person in it.”

The students hosting the vigil set out paper bags that anyone could take and write names or prayers in memorial to those who have been lost. Then as the light slowly disappeared from the sky, glow sticks were taken and dropped into the bags, which were lined upon the sidewalk so those who walked by could read the names and messages.

TWLOHA does not limit its members to only those who have personally experienced the effects of suicide. The group is open to anyone who wishes to help or get involved.

The councils president, Susan Hill learned aboutt TWLOHA from a friend who said it was supportive place.

“I didn’t really know anyone, and so I went to a meeting and I noticed that everyone was already best friends with one another and I thought of how great that seemed,” she said. “…It’s really great and it’s changed who I am.”

She said before joining the group she was shy and now she has found a group of supportive people.

“I think that this event and more specifically, To Write Love On Her Arms, as a whole, helps people understand how they can reformulate their life without a certain person in it,” Biggs said. “It helps people learn to survive when faced with something so terrible.”

To get involved on campus students can attend the meetings the youth council has Sunday evenings. Or to learn more information about the To Write Love On Her Arms organization and what they do, visit the TWLOHA website.