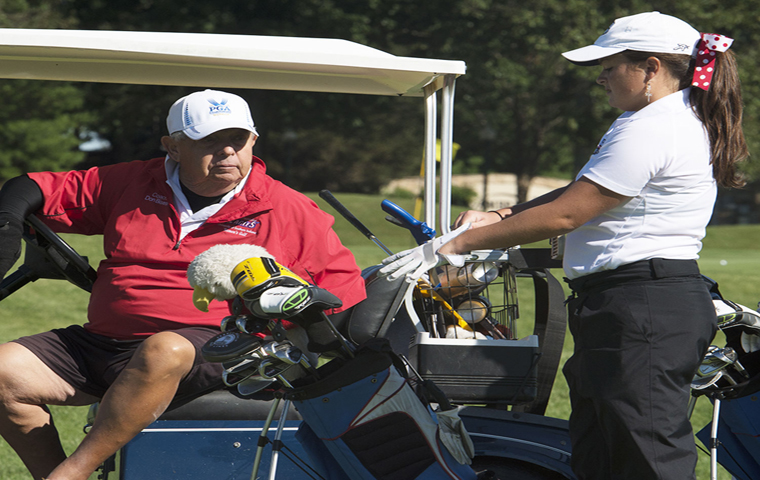 Anastasia Carter said Don Bisesi would be ecstatic to see her pursuing a career as a professional golfer.

Bisesi died in December of 2015 from cancer, but Carter said she knows he is watching.

“He was just one of the best coaches,” the former USI golfer said. “It was like having a grandfather as a coach.”

Carter will be traveling back to the university to attend the inaugural Don Bisesi Memorial Golf Scramble Saturday at Cambridge Golf Course.  The golf teams host a scramble each year to raise funds for the team, but it has been renamed in honor of Bisesi.

The cost will be $100 per person on each four-person team and registration is due today. Teams will participate in an 18-hole scramble and have a meal afterward that is included in their fee.

There will be prizes for the longest drive, winning team and closest to the pin. Golfers will also have the chance to win a $10,000 hole-in-one prize.

Brian Symonds and Jeff Howerton, both members of the Professional Golfers Association, will hold a short game clinic at 12:30 p.m. that is free for all ages.

Lu Anne Howerton, the coach who succeeded Bisesi, said there has been a huge response to the scramble this year. She said it will most likely be the largest one the team has had.

Don was loved by everybody, so he knew so many people…,” she said. “I think that is the reason we had such a good response to this tournament.”

Howerton knew Bisesi for years before he approached her about the coaching position. He was a pro at Helfrich Golf Course and knew her husband.

Bisesi was the person who invited Carter to USI after seeing her play in a summer tournament. She said USI was the only school she looked at in Indiana and after her visit she fell in love with the school and with Bisesi.

Carter said she doesn’t believe he ever let on how he felt while he was sick and coaching.

“I don’t think he ever let it affect him,” she said. “He loved coaching so much.”

Bisesi was able to be present for the fall season and attend the team’s tournament in Puerto Rico during October, but he wasn’t able to see Carter become the first female golfer at the university to go to nationals.

“I just wish he had been there so badly,” she said. “He would love to see it.”

“(Bisesi) was debating what would be best for us,” Carter said. “All the traveling and sitting in the car, I think he realized he couldn’t do it that last semester.”

Carter said the transition to a new coach was difficult, she didn’t want a new coach, but as the season went on it became easier.

“(Howerton) ended up doing a really good job,” Carter said. “I really enjoyed her as a coach.”

Carter will have the chance to see Howerton and former teammates of hers when she comes back for the scramble. She said she still keeps in contact with her teammates.

She said the team was very close and the experience they had with Bisesi brought them closer together.

“He wasn’t just a coach,” Carter said. “We could talk to him about anything.”