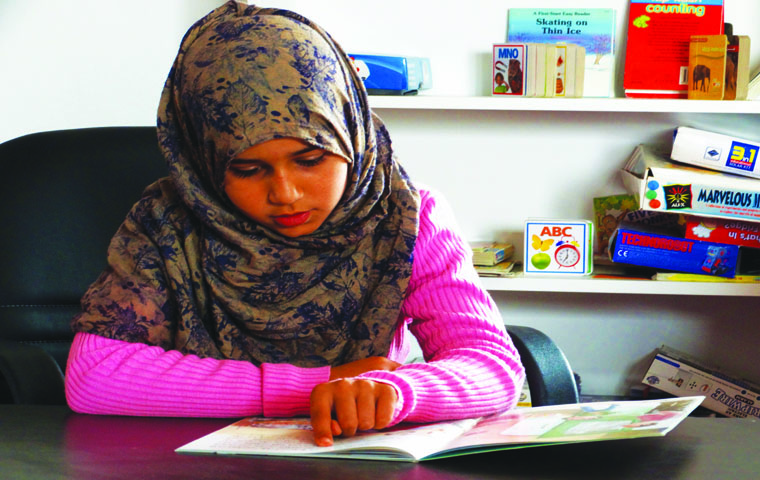 A student studies at her school library which was paid for by Road to Mafraq. The donations which funded the project were largely from the Evansville community. Elizabeth Riedford, an organizer for “Run for Refugees,” said the girl told her her dream was to work hard to “become just like her teacher.”

But she does believe the community can raise awareness and money that can help.

That is part of the goal for the “Run for Refugees” which will take place Sept. 10 at the Hearts on Fire Course at USI.

The 5k run and one mile walk will benefit Road for Mafraq and the efforts to provide education to the children who were forced to relocate after fleeing Syria.

Riedford, an adviser within the College of Nursing and Health Professions is one of the organizers for the race. She traveled to Jordan along with USI alumna Ellen Billard, the founder of Road to Mafraq, in March.

Riedford said the experience was wonderful, but challenging because she saw the reality of the situation first hand.

she said. “When we find out there is a generation of kids that almost over half of them are out of school right now, that is just not okay with me.”

According to statistics from Road to Mafraq, over 13 million children had their education disrupted by violence in the Middle East.

Riedford said she was able to take all of her experiences from Jordan and bring them back to Evansville. She connected with locals who were also supportive of Road to Mafraq. That is when the idea for the 5k started to materialize.

Riedford said the money raised during events like the 5k and others for Road to Mafraq have already done visible good in communities in Jordan.

One school she visited was able to add a second story which was turned into a library. She said the principal will use the library as a reward for students who are behaving and doing well.

“What was happening was the library has become this safe haven for students,” Riedford said.

Many schools have been developed but they lack safe areas for students to play, Riedford said future money raised will help those areas be built.

She said there was a positive response to the visit she was a part of with Billard, but they do not focus on the events that happened before families arrived in Jordan. Riedford said they always ask the children what their dream is and what they hope to be when they grow up instead of asking them to explain the events that made it necessary for them to leave Syria.

Sarah Rogers Wagner talks to her 9-year-old daughter Malley about the fact that there are children her age who have never attended school, along with the situation in Syria.

“It’s something that we make a point to have conversations about with our children in age appropriate ways,” she said.

Wagner, who graduated from the university in December of 2003, is one of other organizers for the 5k and her daughter will be racing in the one-mile walk.

Malley has even held a lemonade stand and started to fundraise to raise money to cover her race fees.

Wagner said she talks with Malley about how not having an education would affect her life.

“(I) make sure she understands people in other regions of the world are really not that different than her,” she said. “These kids have the same goals and dreams she might have.”

Wagner said the race is large portion of the event, but there will also be a community fair that includes henna booths and a craft booth.

The crafts created will be sent to students who are supported by Road to Mafraq.

She said even if people cannot race she hopes they will come and experience the event to see the work that is being done locally.

“We are more alike than we are different,” Wagner said. “It just kind of hits home, the work we are doing helps real people with dreams just like we have.”