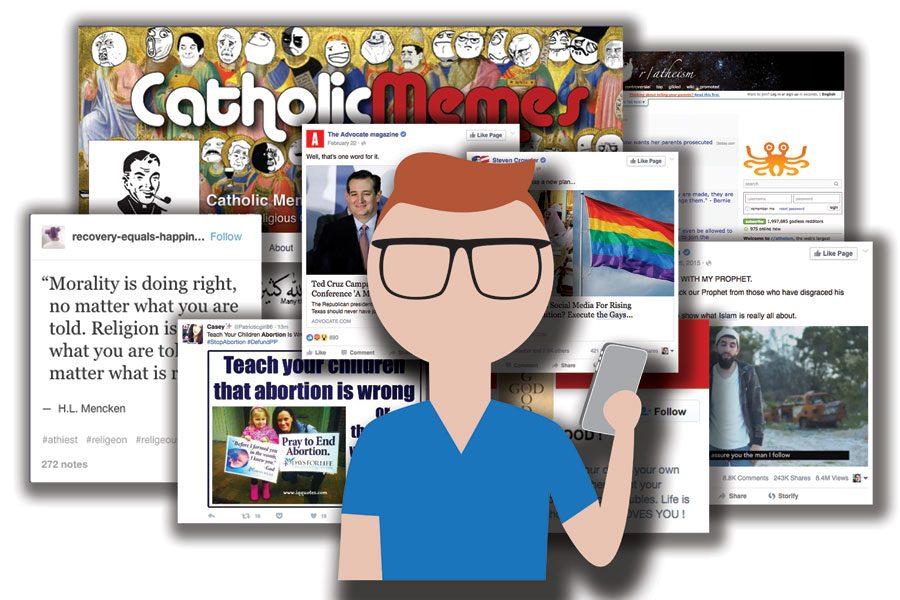 Megan Dickens struggled for years with the concept of homosexuality.

The graphic design alumna grew up in a small, mostly conservative Indiana town, where she was taught that same-sex relationships were sinful.

“When I started college, there seemed to be a very large push for the gay community,” Dickens said. “I had a really hard time with it.”

The 22-year-old Office Depot print supervisor had no idea she would feel like her views on LGBT rights were in the minority on campus, she said, but her activity on the Internet gave her a new perspective.

Dickens is just one of millions of people, young and old, whose religious and political views are shaped by social media every day.

“Facebook has opened up this weird relationship with everyone where I’m allowed to talk about politics and religion,” she said. “If I was friends with you in real life, we might talk about these things, but we would never argue about them. I feel like what happens is we are all given a megaphone.”

Half of Millennials (individuals born between the 1980s and the mid-2000s) describe themselves as political independents and 29 percent say they are not affiliated with any religion, according to a 2014 Pew Research Center study.

The study concluded that these are at or near the highest levels of political and religious disaffiliation recorded for any generation in the quarter-century that the Pew Research Center has polled on these topics.

Also known as Generation Y, these are the first people to grow up in the digital age.

These “digital natives” are known to be avid consumers of social media, which plays a major role in how they construct their world view.

In a 2015 study by American Press Institute and the Associated Press-NORC Center for Public Affairs Research, 88 percent of Millennials who participated said they use Facebook to find news.

Dickens’ strict religious upbringing sculpted her negative perception of homosexuals, but as she pressed down on her mouse to play an online video, she said something clicked.

The video titled “Love Has No Labels” features a giant X-ray that guises the true identities of the couples behind it. Onlookers gather around the skeletal images of two figures kissing, holding hands and dancing. Gay, straight and interracial couples emerge to reveal that no matter the combination, everyone looks the same on the inside.

After watching the video, Dickens said she started to pay more attention to streams of positive LGBT messages online.

Dickens said she now strives to no longer judge people.

‘Where the people are’

In a way, Dickens said, almost everything she comes across on social media ties into religion.

She said even politically-charged posts carry a religious message since they usually pit conservative against liberal, who are frequently depicted as pro-religion or anti-religion.

“I think everything boils down to something religious or something concerning moral value when it comes to what I see on the Internet,” Dickens said.

Not only are Millennials less likely than older generations to be affiliated with any religion, according to the Pew study, they are also less likely to say they believe in God.

Eighty-six percent said they believe in a higher power, but just 58 percent admitted to being “absolutely certain” of God’s existence.

Jay Kranda hopes to reach this demographic of nonbelievers via social media.

Kranda, who worked as the online campus pastor for Saddleback International Church in Lake Forest, California for six years, said the main reason the church uses social media is to engage with its community about its worship services. He considers social media an extension of the church, which attracts nearly 25,000 people to its campus each week.

“We have internal messages and external messages,” he said. “We are purpose driven in our strategies. We build people from community to commission.”

The church posts religious quotes and shares event information to its social accounts to attract those who may be interested in God, but aren’t ready to apply the interest, he said. They may agree with a quote the church posted or share it, which could spark them to check out their website or even physically visit the church.

Kranda said there have been many instances of people joining their church because of social media.

The reason Saddleback uses social media is because that’s where the people are, the pastor said.

This is by no means a new method.

“Different movements have been powerful at different times,” Kranda said. “The apostle Paul capitalized and was able to plant churches in the first century because of the Roman roads that were paved.”

The printing press allowed the German Bible to be printed in different languages and radio and TV broadcasts also amplified and altered the way religious leaders spread their messages.

“I don’t care if you’re selling shoes on Zappos or you’re in the church trying to sell the message that Jesus loves everyone,” Kranda said. “You’re going to capitalize on whatever’s happening and where people are.”

Dickens said she lost a close friend because of a social media post.

She met the girl in class and they soon became friends until the person — an atheist — found out about Dickens’ Christian beliefs.

“Our friendship became (the person) trying to argue with me, and I was like, ‘We never had this problem until you found me on the Internet,’” Dickens said.

She said it was heartbreaking that something she posted online ruined their friendship.

Although half of Millennials identify as politically independent, the Pew study shows the social-media savvy demographic votes “heavily Democratic” and holds some liberal views such as favoring an activist government, marriage of same-sex couples and marijuana legalization.

Normally, if Dickens agrees with someone, she said she puts her “two cents in” as a confirmation of what that person is saying.

She said she “zips her lips” when she disagrees because she doesn’t feel it’s her place to tell someone they’re wrong. But many Facebook users have no problem starting arguments online.

“That’s what Facebook is to me: Here’s some controversy. Now start bashing each other,” she said.

But according to the Pew study, half of all Millennials choose not to identify with either political party, and 31 percent say there is a great difference between the Republican and Democratic parties. Fifty-eight percent of people from older generations surveyed felt the parties greatly differed.

Nick Fish doesn’t mind if people disagree with his organization online, as long as it’s not based on a misinterpretation.

Fish is the national program director at American Atheists, a non-profit organization that fights for the civil liberties of atheists and the separation of church and state.

Fish works to develop messaging and outreach strategies, particularly in the arena of politics and policy, and engages local activists to amplify the voices of atheists in public discourse.

The non-profit posts content relevant to the atheist community with a political or community angle, Fish said, especially at times when its identity is attacked or denigrated by members of the political class or political establishment.

“When they see that one of their central identities is under attack, they are more likely to share it, engage with it,” he said.

Fish said they are focused on showing atheists in a positive light, as opposed to attacking religious organizations.

“No matter what we do, people are going to be less than thrilled with anything we post, or people who oppose atheists or religiously proselytize, we mostly just ignore it,” he said. “We do, however, listen to the tone and the substance of people within our own community because we want to be conscious of the way people perceive things.”

A BuzzFeed video about depression follows a man going through his day-to-day routine.

He encounters many people, including a particularly chipper co-worker who stops him repeatedly to happily greet him.

The end of the video reveals the man being followed does not have depression, but the one who appeared so happy and cheerful did. The supposedly happy co-worker commits suicide.

“It made me think about a lot of things in my life,” Dickens said. “It made me think, ‘Well, I can’t judge others based on what I see on the outside because I don’t know anything about them on the inside.’”

Dickens said it inspired her to be a better person and open up more to other people.

“I (now) accept a lot more of what people say,” she said. “I understand where they’re coming from because I don’t know their story or their life.”

Fish said, like Kranda, he has witnessed a lot of engagement online, especially from young people who tell him they first saw his organization on Facebook.

That is why he emphasizes engaging people on social media platforms, he said.

According to the American Atheists’ Facebook analytics, 65 percent of their total audience is under the age of 34.

“That is a huge number and that’s broadly reflective of the role social media has in people’s lives under 30,” Fish said. “It certainly is self-evident that young people are engaged in social media to figure out their worldview, and how could they not given the role it plays in our lives?”