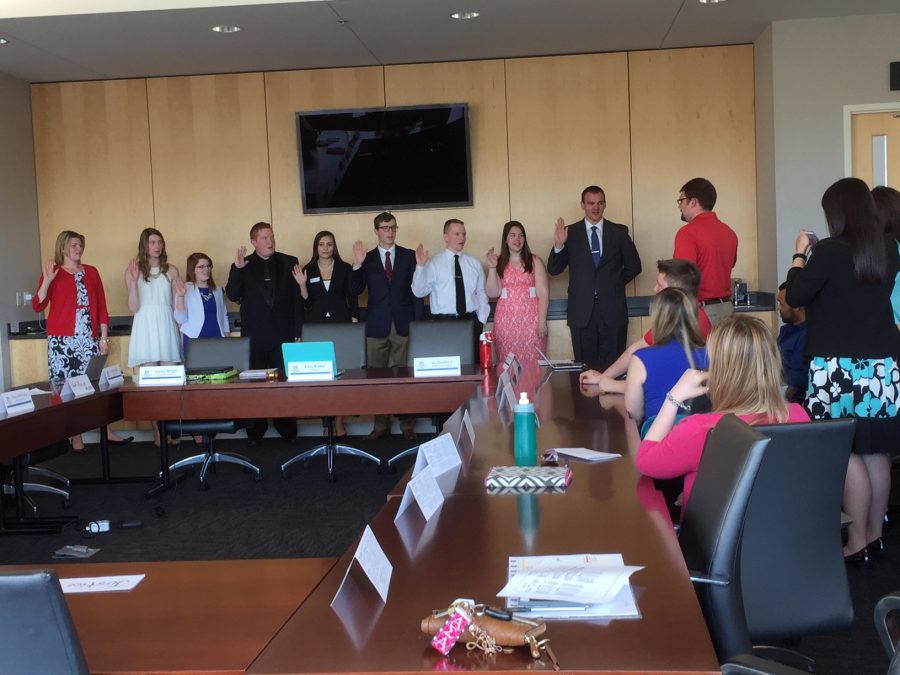 The Student Government Association’s last meeting of the semester had some “firsts” and some “lasts.”

As ’15-’16 President Alexa Bueltel sat down in her meeting chair today, she knew it would be the last time.

“My favorite thing about this role was not only working with students but with administration,” she said. “This role really opened me up to that, and it’s been really cool.”

After graduating, Bueltel will be attending Iowa State for student affairs, which she said is one step closer to her dream of working at a university.

“I’ve loved collaborating with other departments and student organizations,” she said. “We’ve made a broader reach for SGA.”

During the meeting, President Linda Bennett presented the newly developed university Strategic Plan as well as upcoming projects such as the PAC renovation. SGA members then voiced suggestions for new projects, such as replacing old signs with more visible building identification. Bennett took notes and listened intently to each suggestion.

“I want to take a moment to congratulate Alexa Bueltel…she has represented you well,” Bennett said. “I look forward to continue to work with SGA through the new president. This organization does so much to represent the student body across campus, and you do it well.”

As her time with SGA ended, Bueltel watched Chief Justice Jason Miner swear in the nine elected members of SGA for next year.

Currently the entire executive board, three administrative vice president and two representative positions are officially filled, and the organization approved to open up applications for the rest of the position.

When ’16-’17 President Ashley Wright stumbled a little when trying to formally adjourn the meeting for the first time, Bueltel helped her out.

“Entertain,” Bueltel said kindly. “You entertain to adjourn the meeting.”

She said she has high hopes for SGA as the future unfolds.

“They need to make sure they represent the students well,” Bueltel said. “They need to go out there and be present and support student organizations in any way they can. That will make SGA successful in the coming years.”