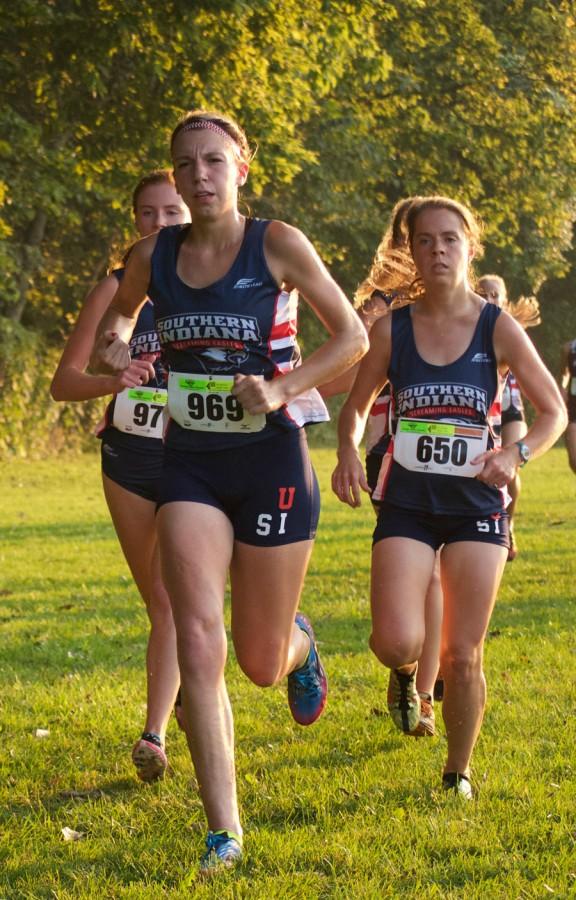 She had been sick earlier that week and her only goal was to have a good race.

“I was thinking I could (earn a personal record),” she said. “But it wasn’t in my mind that I would be getting the record that night.”

Roberts broke an 11-year-old record in the 5,000 meter race, which was previously held by Heather Cooksey. Cooksey entered the USI Athletic Hall of Fame as part of the 2016 class of athletes and coaches.

The time is ranked first nationally and is about six seconds shy of an NCAA Division II automatic qualifying time. Her time helped the women’s team finish 13th. The men’s team ended the day 5th.

“It definitely was a high point (of this year),” Roberts said.

She said she didn’t finish the indoor season as well as she had hoped, but it made her more determined for outdoor.

Despite this, Roberts said, her improvement from the indoor to outdoor season is huge compared to last year.

She said her stronger workouts encourage her and, overall, outdoor plays to her abilities more than indoor.

Outdoor tracks are larger than the indoor tracks, which can often be 200 or 300 meters long.

Roberts said the 400-meter-outdoor track is better for her stride since she is tall.

“It feels better than indoor,” she said. “I think mentally it helps to know you have less laps.”

Roberts said her goals for the rest of the season are to qualify in the 10k and 5k races for championships and to have more girls prepared to compete in the spring.

“I’m just happy to have Coach Hillyard as a coach,” she said. “The teammates that I have are really supportive.”

Hillyard was not surprised by Roberts’ performance.

“I certainly knew from her training that that type of performance was possible,” he said.

He said the team considered the Washington invitational to be the first meet of the outdoor season, despite having one before it.

“The previous (meet) was more of a practice opportunity,” Hillyard said.

While most of the runners focused on the 5k, the field events were still spread out. One area of success was in the throws.

Junior Micheal Hammonds finished fifth in the shot put and seventh in the hammer throw.

He broke his own outdoor school record in the shot put with 49 feet, 11.75 inches.

Hillyard said the meet was a positive for both sides.

“(The meet was) definitely good,” Hillyard said. “But you’re only as good as you are on that day.”

He said as the season progresses they have to remember the goals set as individuals and as a team.

Hillyard said the aim for the men’s team is to be top three at the GLVC Championships and top five for the women. He said it is attainable, but will offer the teams a challenge.
“Every athlete on the team has a goal,” he said. “How do you prepare if you don’t have an end result that you target?”