Senior psychology major Audrey Beckerle and junior nursing major Krista Zieg warm up with leaps at the beginning of dance team practice last October in the Physical Activities Center. The team will be competing in the National Dance Alliance College Nationals Thursday in Daytona, Florida. 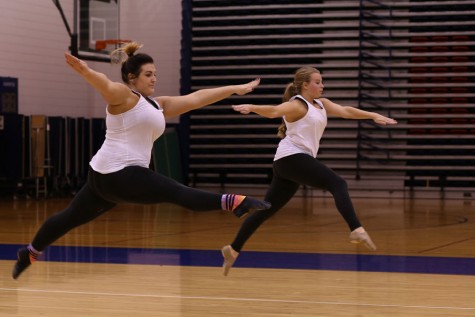 Senior psychology major Audrey Beckerle and junior nursing major Krista Zieg warm up with leaps at the beginning of dance team practice last October in the Physical Activities Center. The team will be competing in the National Dance Alliance College Nationals Thursday in Daytona, Florida.

The dance team struggled with unity at the beginning of the year.

“It’s a very young team. We have a lot of new members this year,” Jennifer Guebert said. “They are each individually very talented, but the goal is to get them to all look like one unit.”

More than half of this year’s dance team consists of new members. The team had no seniors, and captain responsibilities fell to two juniors.

“There were challenges in the beginning to mesh as one,” said Guebert, the team’s head coach. “They have come together really well.”

The team will compete in the first round of National Dance Alliance College nationals Thursday. If the team passes the first round in the top half of the Division II teams competing, it will move directly to finals.

If they would fall in the bottom half, the team still has a chance to advance by performing in the Challenge Cup.

After an exhibition performance for friends and family Sunday afternoon, Guebert said the team is confident in its ability to finish in the top half.

Guebert said some members of the coaching staff were in tears after the performance because they felt that “a-ha moment,” where everything falls into place.

“The girls feed off our energy,” she said. “They know by our faces whether we are pleased or not.”

The team began to prepare its black widow-themed routine at the start of winter break.

The team will perform in the team dance category, which requires 30 seconds of three dance styles: jazz, pom and hip-hop.

Guebert said the routine is hard-hitting, sassy and utilizes moves that invoke a spider-like quality.

The uniforms feature a red, hourglass shape like the markings of a black widow.

The nationals routine should be tougher than any of the other routines performed during the year, Guebert said.

She said if it isn’t challenging for the team when it first begins to rehearse, they know it won’t make an impact on the judges.

Once basketball season begins, the team does not have a lot of practice time to dedicate to the routine.

Alexa Snow said the team ran through the routine once or twice a practice during basketball season, but once that ends, they dedicate all three hours to nationals.

The team practices weekly on Sunday, Monday and Wednesday, and Snow said when practice is entirely dedicated to nationals, they pick apart each aspect of the routine.

“I would say this year we started out really, really strong,” Snow said. “But none of us really knew where the year was going to lead us.”

The junior captain said the nationals routine highlights all of the dancers’ abilities.

She said all the dancers come from backgrounds with different styles, but they all managed to pull together for their routine.

“We are very ready. We know that we are in it for the long run,” Snow said. “We know we are in it to make it straight to finals.”

She said she feels good about the team’s chance at beating its previous records.

This year, every member of the team will compete in Daytona because no alternates were named.

“I think this year having no alternates helped us a lot with the unity,” she said, “bringing everyone together.”

Snow said everyone being able to compete stopped the fear of who would have to fill an alternate position.

“I think throughout the season we were consistent,” she said. “I think nationals is our high point.”