Far from familiar: “It makes my everyday life hell” 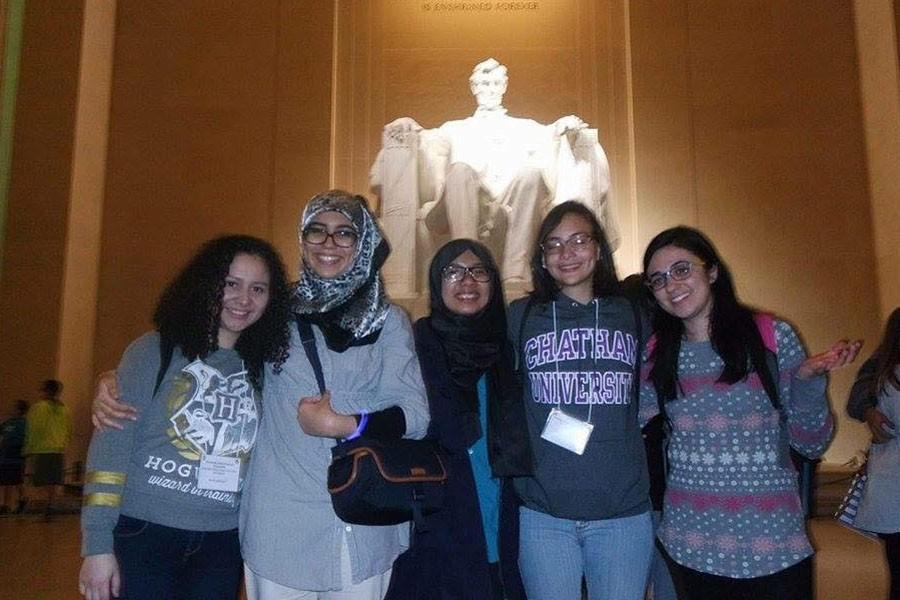 Deena Bregheith (far right), a junior English major, joins her friends in front of the Lincoln Memorial during her trip to Washington, D.C.

The Shield interviewed three international students to see how they were acclimating to life at a U.S. university. In this weekly series, The Shield revisits Deena Bregheith, a junior English  major from Palestine, to find out her opinion on U.S. politics.

The Shield: Do you have an opinion about politics or Trump?

Bregheith: I don’t think I need to have an opinion about (Trump). The other day I was thinking something funny. What if Trump wins and he actually brings all the plans and ideas he has in mind into reality? What would America look like? He advocates for everything America is not, so I think it would lose all of its glory and strength. There should be another nation in our world that elevates and reaches that point and takes America’s spot. I had this conversation with my roommate, and I said a couple of other countries that would take the chance and take America’s place in the world. But it would be a disaster if he wins, really for each and every person in this country, and I can’t imagine the mess that would happen if he wins.

The Shield: What do you think about U.S. politics?

Bregheith: I don’t speak politics. I hate it. I don’t like the word hate, but I only use it for politics. I just don’t like politics. In Palestine, it makes my everyday life hell. Politics makes the lives of tens of millions of people hell. So I just don’t like it. I mean, when I think about it, some people are really good from the inside and they just want to get to know each other and just live with each other, and then comes a politician and he is like, “We are at war” or  “We are going to war with these people.” It’s just 99 percent of people are good and peaceful, and then there’s one percent —  the politicians — who are always telling us we need to kill each other, and we listen to them because they have the power and they have the money.

It’s really interesting to see Trump’s idea of the wall. A lot of people say, “I just want him to win to see how he will make that wall, because it’s not even possible to make a wall.” But it is possible. It happened in Berlin and it’s also in Palestine. We have that separation wall in Palestine, and the wall in Berlin is nothing compared to that wall. It actually separates two areas from each other. It’s really huge and it’s still being built today. We need to learn from others’ mistakes.

I’m sick of this; just one or two people speaking for the millions and they lead people astray — people who are not really educated.

The Shield: What do you think about the voting situation?

Bregheith: Even if I wanted to vote, I can’t, and thank God I’ll be gone for the election. But a big problem I hear from a lot of young people is they always choose the least worst candidate. It’s not because he’s good or she’s good, it’s they are least worst. You say I just want him because I don’t want that one to win. Maybe that’s why the voting rate in the states isn’t that high.