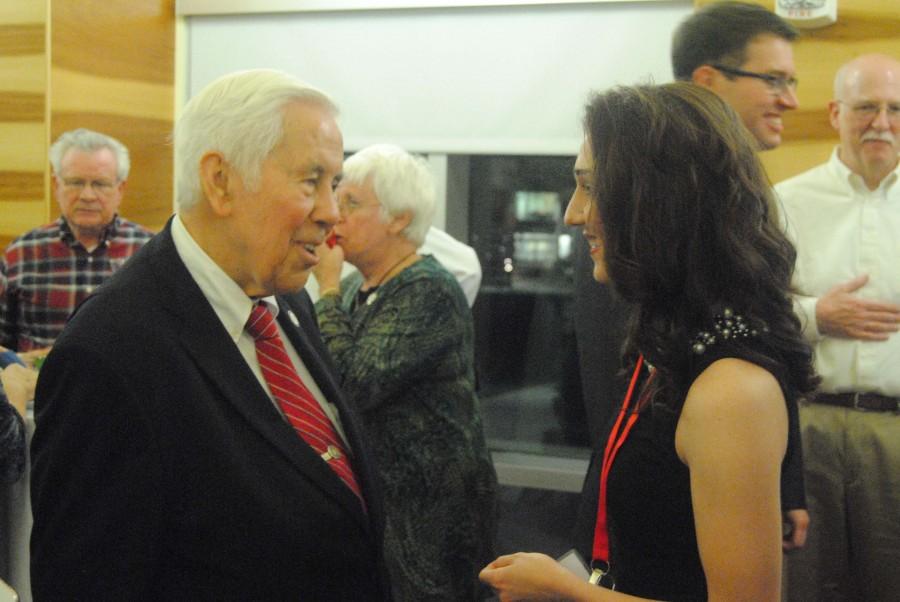 “It was really good to be able to hear the perspectives of two seasoned veterans in politics, especially since one of them is Democrat and one’s Republican, and to see how well they work together despite how partisan our system is right now.” Grudzinski said.

The political science major, who also wants to run for public office in her future, said Lugar and Hamilton are right when they say there’s a lack of civility in politics.

“It’s definitely something that bothers me as a young person to see how politics is going (right now) and how difficult it is to pass any sort of legislation because no one is willing to compromise,” she said. “It really has to be an effort to try to be civil in politics, and in life.”

Lugar said now is the time for students like Grudzinski to be considering careers in not only public office, but careers in which they will serve the public.

“I hope a large number of students at USI will be thinking about the possibilities at some point in their lives, for public service,” he said. “It may not be elected office; it could be a number of ways to serve human beings. There’s nothing more satisfying.”

Hamilton said the college generation and younger must be taught about the “obligation of citizenship.”

“The government needs the prod from citizens, and if we don’t get it, our government is going to be in big trouble,” he said. “The people coming out of our universities have to supply that.”

Hamilton also said it’s up to higher education to provide the future voters with skills in being civil and responsible members of society.

“If we don’t produce good citizens, all the science and technology and engineering and math won’t be worth a diddly damn,” he said.

Hamilton said with being on different boards and commissions, he had to learn to see the people he worked with as humans rather than members of a different party or of opposing opinions.

Lugar and Hamilton touched on political issues such as being opposed to term restrictions and the conduct of politicians like senator Ted Cruz, but both kept returning to a singular concept.

“Civility is the lubricant. It’s the essential,” Hamilton said. “Without it, we don’t get very far.”

Interim Dean of Liberal Arts and history professor Michael Dixon said he’ll use Lugar and Hamilton’s message of civility and apply it within his own teaching.

“We’re reading a political speech in my Latin class in which there are undertones that are not very civil,” Dixon said. “I can point out what I heard tonight…and show that a political debate that happened 2000 or so years ago is still relevant.”

He said the discussion challenged the audience to think of its responsibilities in terms of government and citizenship.