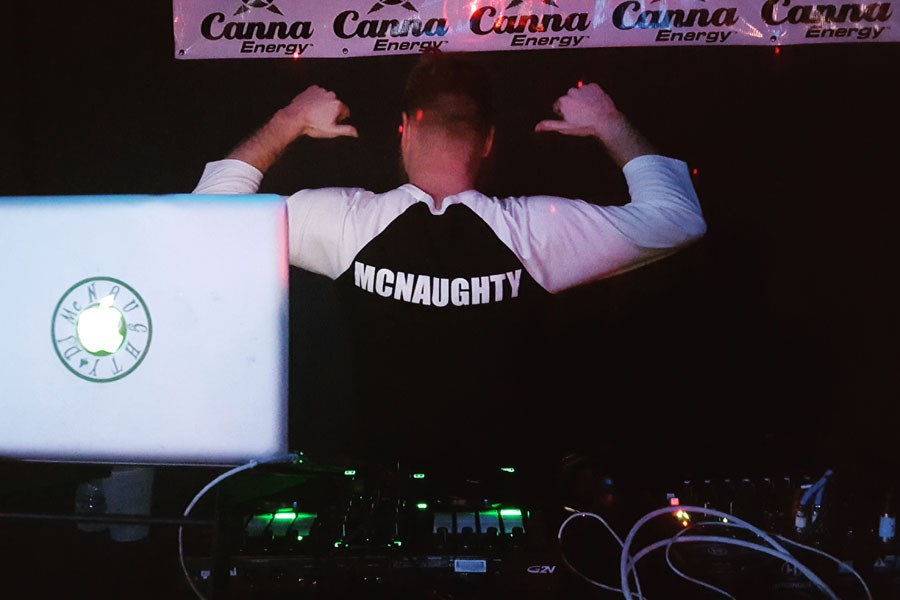 There are two stories regarding how DJ McNaughty chose his stage name.

The true story is that Auston Bruder found an Irish-name generator on Facebook.

He prefers the former.

“It’s like if you ever break your arm, you always try to come up with a cool story instead of saying you tripped over a tree branch,” he said.

Bruder began DJing house parties for free about three years ago and he got his first gig opening for other artists last June.

The police and fire marshal shut down the second party Bruder headlined at Jimmy’s Hobo Jungle for breaching capacity by 400 people.

“Word got around town because I don’t think a bar in Evansville has been shut down for being over capacity like that in a while,” he said.

Not long after that party, Nelson contacted Bruder.

Working with the rapper has taught Bruder things not only about the music industry, he said, but about himself.

“He told me basically just to enjoy what you do and do it until you don’t enjoy it anymore,” he said. “If you want to make a career out of something, it should be something you enjoy.”

Bruder said he’d like to DJ professionally, though it’s a competitive market.

Nelson began rapping when he was 18 after he lost his eyesight and could no longer play basketball.

“Music was something that my mother was doing and I tried and liked it. And ever since then, I’ve been focusing on standing out and being different with music,” Nelson said.

He reached out to Bruder because he noticed genuine love for music, he said. This was around the time he and the CEO of Rockin’ Entertainment LLC decided they wanted to build an entertainment company for college-aged adults.

“We wanted to give young people like McNaughty a chance to be in something they love and actually make money from it,” he said.

In the future, Nelson said he wants to continue finding young talent in DJing, managing, event planning and rapping, among other things.

“My plan is to build an independent hub for talent and to educate people to show them that we don’t have to wait on the music industry,” he said. “We are the music industry and we create our own opportunities.”

He said he also hopes to empower other blind musicians.

Nelson said he wants the students he mentors to learn that if he, as a blind man, can make it in the music industry, they can as well.

“Also, I really press humbleness and I tell (the students I work with) to stay humble with people,” he said. “My motto is this: Work at it. And therefore, if I fail, I’d rather fail knowing I gave it my all than to fail knowing I failed because I didn’t give it my all.”