Paraguayan student gets 'taste of home' 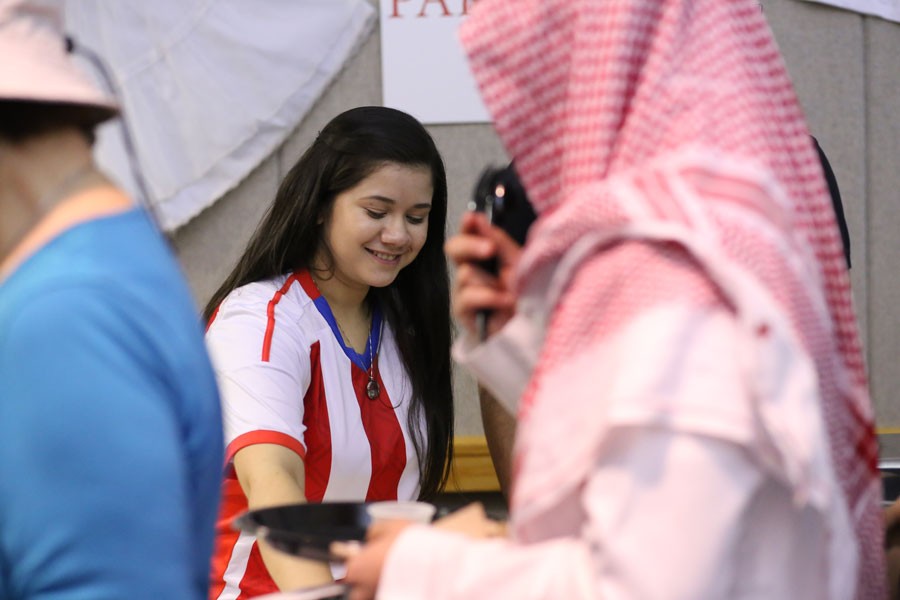 The Shield interviewed three international students to see how they were acclimating to life at a U.S. university. In this weekly series, The Shield revisited Sandrita Sanabria, a junior international studies major from Paraguay, to see what it was like to represent her country at the International Food Expo.

The Shield: What was it like to work the Paraguay booth at the International Food Expo?

Sanabria: It was great. I made tortillas, which kind of look like pancakes, and they are made of flour, eggs, milk, a little bit of salt and cheese. If you want, you can put green onions in it. It was different from Mexican tortillas and I think people liked it. I’ve never made one back home, but I’ve seen my mom making them, so I decided to try it and It was a lot of work for sure. I didn’t expect it to be that hard, but I had good volunteers. They were so helpful and I couldn’t have done it without them.

I am the first Paraguayan here, so it was good to share a little bit of my culture with people and share with them Tereré, which is a national drink in my country. People drink it a lot back home.

The Shield: Did you try other foods?

Sanabria: I’m a chocolate lover, so I loved the Brigadeiros (chocolate balls) that Brazil made. Then another country made something sweet with coconut and it was so good. It was my favorite, I think… I really liked the Italian, German and Indian foods, too.

The Shield: Can you tell me the differences between the Paraguayan tortillas and Americanized tortillas?

Sanabria: I used the same ingredients, but it still didn’t taste the same. It tasted pretty close to what it tastes like back home, and I think that was cool. When I tried it, it took me back to my house and put me back in a Paraguayan environment. I think it’s cool that a piece of food can take you back to another time and can bring out so many emotions.

The Shield: When you were making your tortillas, you said they brought back memories of Paraguay. Is that what helps keep you connected to your country?

Sanabria: Yeah, it was definitely like a taste of home. But I feel at home here, too. I’m here for four months, so I don’t have time to miss my family. I love them and I know when I come back they will be there.

The Shield: Was it fun to see how other people made their foods?

Sanabria: It was fun because I never cooked before at home and people would ask me, “Do you know what you’re doing?” and I’m like, “It’s my first time trying” and they were like, “We are on the same page.” So, most of the international students that I talked to never made this food back home … now we are making it for 500 people, so you better know what you’re doing. It took me around five hours to make the tortillas, and the dough took me like two-and-a-half hours, and frying the tortillas took a while.

The Shield: Is there anything you would like to add?

Sanabria: It was neat trying different foods. Arabian foods all have rice, and I think it’s neat how foods are identified. Some continents are identified for rice or chicken, and then you have other cultures that use a lot of fried food like Ecuador. Ecuador made empanadas and that’s something I have at home all the time. It’s fun and interesting to see how Europe uses similar ingredients to Asia and South America.