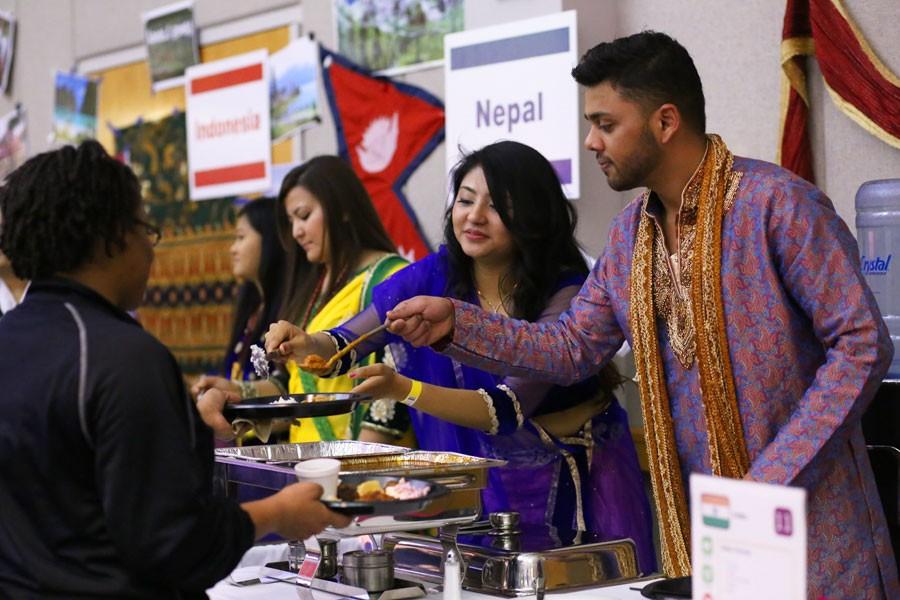 Gloria Sengwe said she always wears the big pink beads her mother gave her before she left Zimbabwe during special occasions.

Friday was one of those days.

This year’s annual International Food Expo featured 22 countries Friday at Carter Hall. The students cooked common foods from their countries Thursday night to prep for the expo, which featured a fashion show, food, music and entertainment.

For the event, Sengwe wore a pink and blue dashiki – a loose, brightly colored shirt or tunic traditional to Zimbabwe..

“It feels amazing to represent my country,” Sengwe said. “Because it’s something not everyone gets to do.”

Blue is Sengwe’s favorite color, she said. And pink is her mom’s.

Sengwe handed out salted roasted peanuts at the Zimbabwe booth, which she said is an everyday snack in her country usually made with the skins still on the peanuts, but the peanuts she used this time were skin free.

“Mostly grandmothers make them, so it’s something dear to the Zimbabwe culture and dear to our hearts,” she said. “Grandparents and older people are important in our society.”

To make the peanuts, Sengwe said she roasts them and then when they are almost done she blends them with a salt-water mixture and lets them dry.

Jackeline Yagual, a sophomore psychology major said the International Club helped with every aspect of the event, from making the food to decorating Carter Hall with flags from different countries.

As one of Yagual’s favorite songs started, she jumped on stage and danced with fellow International Club officers.

“It’s nice to see every culture get together and how they are inspired to express who they are,Yagual said.”

The treasurer of the club said after being busy to put the event together it was nice to finally have fun.She said she enjoyed sampling the food, especially the South American booths.

“My favorite food is from Ecuador, because I’m from Ecuador,” Yagual said smiling. “But everything is super nice.”

Sophie Gill said she went to the event because she switched her major to international studies.

“I want a basic understanding of the world so I can make great decisions in life and not be close-minded,” Gill said. “Being close minded can lead to ignorance and ignorance is not a good thing in a world as big as ours.”

Gill said food is a great way to understand different cultures because it shows what spices people might use or how much effort they put into it.

“I recommend trying everything,” she said. “But don’t eat too much at first, but sample it. It gives you a glimpse into everything.”

Gill said her favorite food items were the rolls from Vietnam, a rice and bean mix with meat sauce from Niger and foods from Italy and Japan.

“(This event) is helping to expand your taste bud horizons,” Gill said laughing.