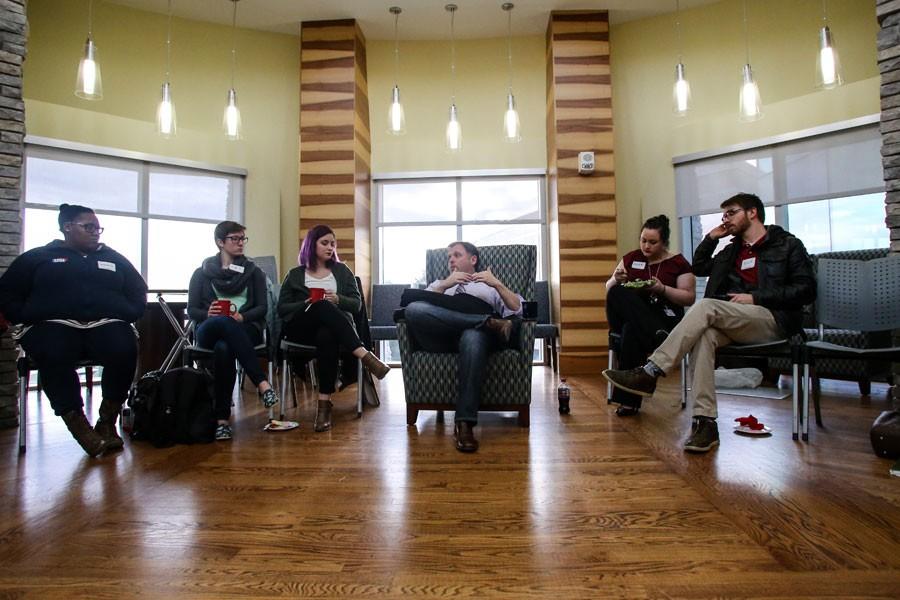 Students gather around Tim Wise, a nationally renowned anti-racist writer and educator, during a private coffee hour that gave students a safe place to ask questions on the topics of racism and discrimination in Tradition’s Lounge on Thursday. Wise served as the keynote speaker for a series of events commemorating Nelson Mandela.

When Tim Wise’s 5-year-old daughter asked if Morgan Freeman was really God after seeing a trailer for “Evan Almighty,” he told her that he was just an actor who plays God often.

Her sister replied, “That can’t be God.”

Even though he knew what she was going to say, Wise asked his daughter why she said that.

“That can’t be God because God isn’t black,” she said. “God is white.”

Wise said the four things that make discussing racism difficult are people’s assumption they themselves aren’t racist, the fact that people can see individual instances of racism, but not systemic racism, the fact that people fail to see how the past affects the present, and that racial inequality not only hurts people of color, but white people as well.

Wise said many white people try to find reasons why they couldn’t possibly be racist, such as having black friends.

He referenced a poll taken a few years ago which said that 142 or 75% of white Americans said they had many friends of color.

There were only 35 million black Americans at the time.

Even if none of the white people polled lied or exaggerated, Wise said, that’s not a worthwhile argument against being racially biased.

“Do you think that a guy can’t be sexist because he dates women?” he asked.

Wise received a D- in reading in 1979 because his fifth grade teacher didn’t like that he had black friends, he said.

“(The teacher) told my mom that any white parent that allowed their child to go to a public school in this day and age, meaning the integrated day and age, clearly wasn’t fit to be a parent and should have their head checked,” he said.

His mother swiftly relieved this woman of her teaching duties in about six hours by making sure she was immediately fired, Wise said.

He said his mother took care of the individual problem, but she didn’t see the structural problems.

“I went back to that middle school in Nashville and sat in classrooms that were teaching the same racist lessons that that teacher would have tried to impart in a much more subtle, pernicious and destructive way,” he said.

White students are twice as likely to be placed in advanced classes as students of color, Wise said.

Black students are three times more likely to get kicked out of school even though white students are twice as likely to bring a gun to school. Drug use is the same among white, black and Latino students, he said.

Banks used to draw red lines around predominantly black neighborhoods on maps in a practice known as redlining, Wise said. The banks would refuse to give anyone living in those neighborhoods a loan regardless of other factors such as credit.

Redlining was legal until 1968.

Government-insured loans in the 1970’s were created to help white families living in low-income neighborhoods.

“You know what does take skill?” he asked. “Living on $387 a month in food, benefits and/or cash, which is what those women and their families were living on.”

By definition, a person can’t be lazy and take all the jobs, he said.

“I don’t ask much of racists because I expect so very little, but at the very least I don’t want a moving target racist,” he said. “I just want you to pick your stupid and stay on that stupid.”

Suicides and drug and alcohol caused deaths are on the rise for white adults ages 45-54, especially for those without college degrees, Wise said.

The same types of death are declining for people of color in the same age range and with the same level of education, he said.

While people of color have known  society and the economy aren’t fair and have been developing coping skills since they were kids, Wise said, white people don’t learn this until they’re adults and don’t know how to handle it.

“We need to think about these four things: own our own biases, own the institutional inequities, be honest about the way that history affects the present and recognize that this is not healthy for anybody’s children,” he said. “But unless we do that we are doomed as a society.”

Wise held a Q&A after his speech.

Instructor of English Xavia Harrington asked how she could help her students who feel excluded from organizations on campus.

Campuses with ethnically-themed spaces, such Multicultural Centers, can help this, Wise said. Students in those types of organizations are more likely to get involved in other organizations as well.

Harrington said if people don’t have discussions about needs and what’s important to them, students feel marginalized.

“Everyone understands what it feels like to be the underdog,” she said.

People don’t need to have had the same experiences in order to empathize with one another, Harrington said.

“Once we as a university get to that point where we understand that empathy means more than sympathy, we’ll be able to embrace everyone,” she said.