Men’s basketball falters in second half 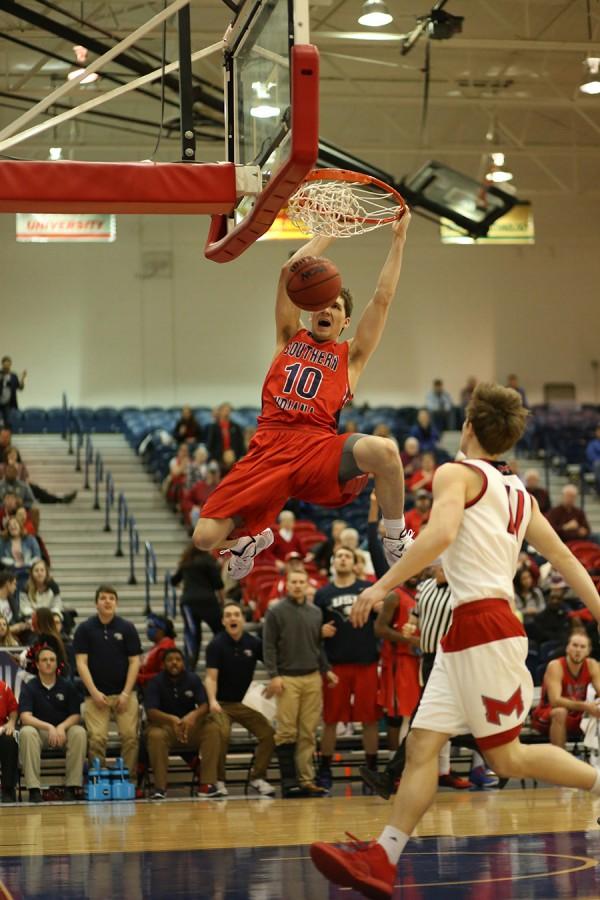 Freshman forward Jacob Norman dunks during the second half of the men’s basketball game against Maryville University in the PAC Thursday. Maryville won 89-80.

Travis Britt said the offense is never the problem for the men’s basketball team.

The Eagles scored 80 points in their 9 point loss to the Maryville University Saints, but Britt said the problem was in the defense.

“We’re always going to come out hot on the offensive end,” the senior guard said. “…It’s just more about stringing together some defensive stops.”

Britt said if the team can get a “three-shutout mentality” at the start of the game it will continue over into the second half.

The team held Maryville to 44.1 percent shooting in the first half, but in the second the team reached 74. 1 percent.

Britt said that is the team’s second-half downfall. The offensive often remains at the same intensity, but the defense falters.

He said the team needs stops at the end of the game when they are most crucial.

Britt was one of three USI players in double-figures with 12. Junior guard Jeril Taylor led the team with 24 points and senior forward Shane Seniour added 11.

Assistant coach Kevin Gant said the second half forced the team to take a lot of shots it wouldn’t normally take.

“We were playing from behind,” he said. “This team is hard to play against from behind.”

Gant said the pace was in the team’s favor, but it didn’t matter because there were times when it couldn’t make shots.

The team ended the game 8-30 from the three-point line, something Britt said isn’t normal.

“That’s not us, that’s not our character at all,” Britt said. “We’re going to shoot the ball better than that.”

Gant said heading into the game Saturday against the University of Missouri-St. Louis the team needs to focus on getting back on track. He said the group needs to string together some wins in the last four games.

“We’ve been talking about the right stuff, and the stuff we need to work on, that we need to get better at,” Gant said. “I think we’ll continue to get better, but we have gotten over that hump.”