A former pitcher for the men's baseball team moves on after his career ending injury. 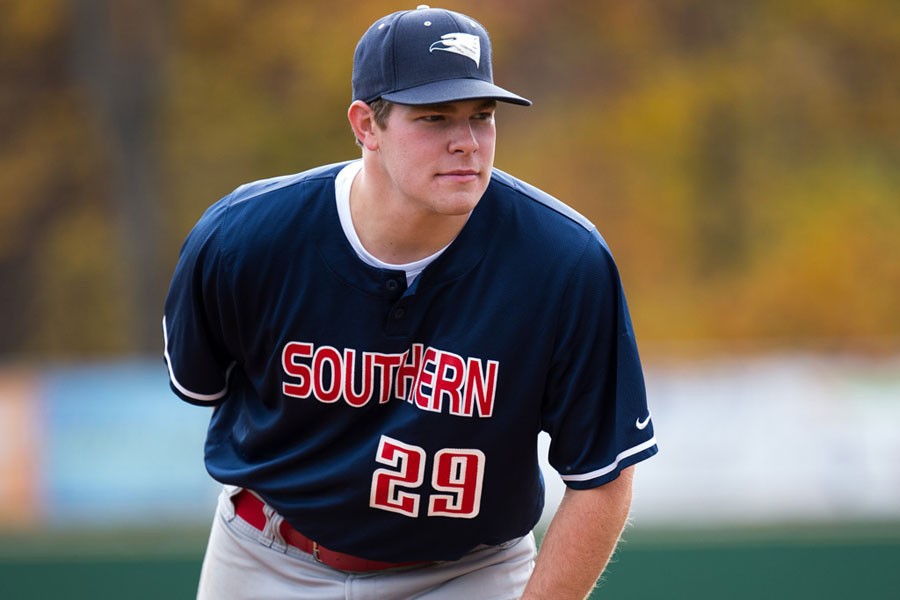 Tyler Nichols, former pitcher for the men’s baseball team, prepares to wind up during a game last season. Nichols had to end his career with the Eagles early after an ACL injury.

Tyler Nichols started playing baseball when he was seven years old and at age 23, an injury at the ended his college career.

Nichols was expected to be a starting pitcher and leader for the team this season.

The athlete transferred from Wabash Valley Junior College for a better opportunity to play baseball, but tore his ACL before finals last semester — his senior year.

“He was going to be our ace pitcher and going to be getting us through games,” Head coach Tracy Archuleta said.

Nichols graduated and was going to attend USI’s graduate program in order to be eligible to play for the 2016 season.

Nichols decided to undergo surgery rather than play through his injury.

“[Coach] Archuleta and I talked about wearing a brace and playing through it,” Nichols said. “But, when I talked to the doctor, he told me that wasn’t in my best interest and that surgery was the better option.”

Despite what the doctor told him, Nichols still considered playing through the injury, but a week before his scheduled surgery, his family talked him into the surgery.

Alissa Kozlecar, Nichols girlfriend of three years, was with him when he got the news of his injury.

“He didn’t really believe it at first, and didn’t think it was going to be that serious since he was walking,” Kozlecar said.

It took him nearly two weeks to come to a decision. His family and teammates were supportive but were disappointed Nichols missed out on his last year.

“I felt bad instantaneously,” Kozlecar said. “He had to go through a lot to be able to play, and my heart just dropped when he told me.”

Archuleta said he knows the team won’t be able to replace Nichols, but will have to find a way to replace his role.

“We can’t replace (a player with) his leadership, with his pitching and his skill set,” Archuleta said. “We will have to have other guys step up and use them to fill those roles.”

Nichols graduated with a degree in public relations and advertising, with a minor in marketing and is now working at his family owned business, Nichols Electric Supply.

Since the business is located in Evansville he still sees his teammates when he stops by practice.

“I went to practice last Sunday for the first time and I was just excited to get to see them and be there,” Nichols said.

He wants to stay involved with the team even if he doesn’t get to join them on field for the first game Feb. 19.

“I’ve gone to a few practices and we were seeing if I could become a volunteer assistant coach,” Nichols said. “Since I am graduated I can’t really do anything during games, but I’ll go to practices and still hang out with the team.”

Nichols said he learned athletics can be taken away too soon.

“It’s kind of (a)cliche but you never know when it’s your last time,” Nichols said. “You have to cherish every moment.”