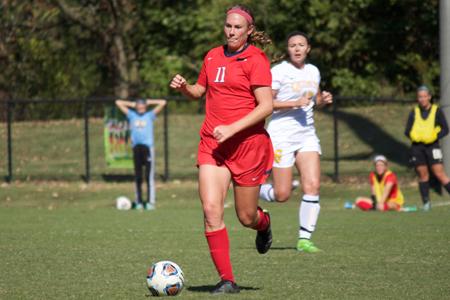 Senior forward Madi Vellky dribbles down the field during a game against Quincy University Oct. 18. Vellky recently was named Division II Women’s Soccer Academic All-District IV by the College sports Information Directors of America for the second time in her USI career.

Madi Vellky used to play nurse as a little girl by putting Band-Aids on her baby dolls.

She also started to play soccer at age four. Now, in her senior year at USI, both soccer and nursing are a major part of her identity.

“I looked at a bunch of different schools,” the forward said, “and when they would sit me down in their office they would tell me they don’t allow their soccer players to be a nursing major.”

Vellky said it wasn’t an option for her to pick another major, even though she understood the reasons why coaches didn’t allow it.

She said once clinicals start, players might miss practices and if that happens they won’t be allowed to play.

“I am going to school for school,” she said. “I don’t know why I would pick a school that doesn’t allow that.”

Vellky was named Division II Women’s Soccer Academic All-District IV for the second time in her playing career at the university after the team’s last game of the season against Bellarmine University.

To qualify for this honor an athlete must have at least a 3.3 GPA and be a starter or important reserve on the team.

Vellky fulfilled both those requirements with her 4.0 and her position as starting forward.

At age 12, soccer became a consistent and constant part of Vellky’s life, she said she played year round with a couple weeks of break in the summer.

Vellky said her family required she and her siblings play a sport throughout high school.

Both of her sisters played soccer, but while they moved on to other sports she started to show a passion for the game.

“I’m kind of a rough and tumble kind of girl,” Vellky said. “I wasn’t the girly girl, and soccer is definitely not a girly-girl sport.”

Just as she had a passion for soccer, Vellky first connected to the “passionate part” of nursing before she understood any of the technique.

When she was in middle school a close family friend suffered brain swelling after a car accident.

“I would read her care pages,” Vellky said. “The mom would talk about the nurses and their care.”

Vellky said this made her realize how important the nurses were in the process.

“There (are) a lot of different ways to help people,” she said, “and nursing was the one that fit for me.”

Recruits come to Vellky now and ask her advice about the nursing program and she tells them all the same thing.

“If you are going to do both nursing and soccer, you have to want it,” she said. “It will be one of the hardest things you’ve ever done.”

Vellky said there will always be a team dinner or event she has to turn down because she needs to study.

“No one wants to say no to the fun part of college,” she said. “Academically, you have to make sacrifices.”

Vellky said despite the stresses and toughness of the program, she wouldn’t change it for anything.

Head coach Krissy Engelbrecht said she would describe Vellky as a perfectionist.

“She’s never been one we had to worry about (academically),” Engelbrecht said. “Sometimes she is a little hard on herself.”

Vellky said she thinks a lot of nurses are perfectionists because they need everything in order, but she also finds this trait comes alive on the field.

“I always want an explanation in soccer,” she said.

Engelbrecht said rather than telling Vellky to work harder, she would have to remind her to relax.

“She likes to ask a lot of questions,” Engelbrecht said. “She’s a very self-motivated person.”

The coaching staff stresses the importance of academics for players and aims to have the entire team above a 3.5 GPA.

Engelbrecht said if players want to accomplish things after college they need to have a good academic record.

Vellky graduates in May and said her graduation plan is a work in progress.

She said senior year is used to fine tune passion and see what specialty of nursing works best for her.

Though she found she enjoys pediatrics, the neonatal intensive-care unit and critical care, nursing isn’t a profession where the rest of her career is decided as soon as she graduates.

“Basically what I’m looking for after graduation is to find a job I’m happy in,” Vellky said. “I don’t think I can hate what I’m doing if I’m (in) nursing.”