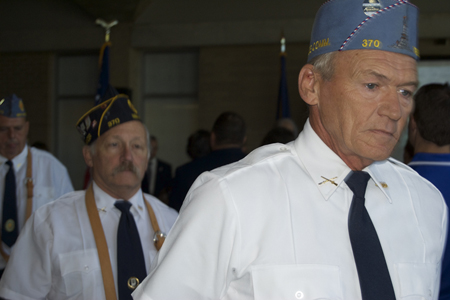 The Color Guard from the American legion in Mt. Vernon Indiana presents the flags during the Remember Our Fallen ceremony on Friday morning. The Remember our fallen memorial is a national touring display of veterans that have passed away in war. The one at USI is sponsored by Fifth Third bank and held on campus.

The entrance to USI’s Performance Center fell silent as TAPS echoed through upstairs Friday morning. in respect for the “Remembering Our Fallen” exhibit. As the program went on tears fell down the faces of those who had lost their loved ones and those who came to remember.

Joel Matherly, manager of the USI Veteran, Military and Family Resource Center, made opening comments. Followed by the Posting of the Colors, National Anthem and Pledge of Allegiance.

Pictures with stories hung from the walls in remembrance for those who were lost. As the POW/MIA Table of Honor was explained, the room filled with emotion.

These brave men and women were our family members, children, neighbors and friends, and their service and sacrifice needs to be remembered, Linda Bennett said.

The exhibit recognizes 151 Hoosier service members, who average a little over 25 years old, and have fallen from wounds suffered in a war zone, since Sept. 11, 2001. There are 11 local families of the fallen, including one USI student.

Bennett said the university is very grateful to have this exhibit to recognize the Hoosiers who stepped up to serve at the time of a traumatic event. She then asked everyone to remember the dread they felt Sept. 11, and how the world had been changed from that moment on.

“You know it changed us and this nation,” Bennett said. “It’s one of those days etched into your memory, because while it was happening you knew nothing would be the same.”

Bennett said there were those who felt the call to serve in that devastating event. Some, who paid the ultimate price, and will be remembered by photographs, and shall remain an important part in everyone’s life.

“(The fallen) have joined the ranks of those that have fallen among many wars, and conflicts to protect this nation and the principle of freedom,” Bennett said.

Dwight Hamilton, southern market president for Fifth Third Bank, Greater Indiana said he was happy with the amount of support the exhibit had. He feels it is a special memorial because it honors only Hoosier soldiers.

“If that hits home it’s supposed to,” Hamilton said. “We should never forget these men and woman, we should observe their memory and support their families the very best we can.”

These men and women deserve to have their names mentioned in pride, and their pictures presented proudly, Hamilton said.

“Remembering our fallen display serves as an inspiration yet emotional reminder that these brave heroes from Indiana paid the ultimate price to protect the freedoms all U.S. citizens enjoy,” Patrick Salvage, Honor Flight of Southern Indiana, said.

On behalf of Mayor Winnecke, Salvage said that Sept. 25, 2015 is now Remembering Our Fallen Indiana Day.

Honor flight of Southern Indiana asks that everyone try and support our Veterans by welcoming them home Oct. 24. Where you can dress in 1940’s attire to make them feel at home. Most of these heroes never received a homecoming and now you can change that.

What: Remembering Our Fallen exhibit

Where: Upstairs of the Performance Center

There is no cost.

They suggest you bring American Flags, signs, Banners, and as many people as you can.