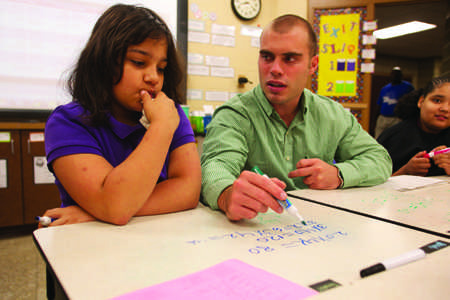 The Pilot Program allows students to go to elementary schools and get a hands-on teaching experience.

Austin Chamberlain, a senior and an elementary education major, said he has grown as a teacher in the first couple of weeks of the Pilot Program.

The program runs from Aug. 10 to the end of the school year.

He said it allows him to follow the same group of students throughout the entire school year.

“We were able to see what the first day of school was like and also what the teachers did before the school year even started,” he said.

Chamberlain said it’s nice to have longer to spend with students, especially since in the past students were only able to work for a semester.

“This program is giving student teaching twice as long as past student teachers to prepare themselves for their own classroom,” Chamberlain said. “It allows us to get all of the behind the scenes information that people do not realize is there.”

Chamberlain said without the program, he wouldn’t know what it takes to prepare a classroom for the first day back to school or how to transition from lesson to lesson.

“The program has allowed me to build relationships with the students and staff,” Chamberlain said. “It is easier to form a relationship with someone when you start at the same time instead of coming in a few weeks later.”

He said the program allows students to do everything a regular teacher does. Pilot teachers get to form lesson plans and attend faculty meetings, as well as observe in the classroom.

“This is an amazing opportunity. I recommend this program to anyone in the education program,” Chamberlain said.

The relationships he has made and the knowledge he has gained is greater than what he would’ve learned in class, Chamberlain siad.

He said it is preparing him for his future and helping him become the best teacher he can.

Gordon, the dean of the Pott College of Science, Engineering, and Education said “The program is a way for students to see the flows of stressful times, relaxing times and the testing dates, so they can get the whole entire experience, from the beginning of the school year to the end.”

Previously, students had a 16-week student-teacher experience, which was based off the university’s calendar. This means previous student teachers would only get a small fraction of the school year, Gordon said.

“If you look at 16 weeks with five days a week that is only 80 days, and that’s a lot different than 186 days,” Gordon said. “This gives them more of an authentic experience of what teachers do and what teachers go through in a year.”

Gordon said he is seeing a lot of integration with the students and the teachers as well as the students themselves.

“We try to give a good mix of the number of students we send to each of the schools,” Gordon said. “We have eight or more student teachers going into that building, which is going to have a huge impact for that school.”

“Students had to have an interest in this pilot program,” Gordon said. “They applied and we selected 15 to start with. So essentially those students knew last year what this pilot was all about and had the ability to apply.”

Students can expect a lot of work. They have to be on the same schedule as the teacher, students will have to treat it like a job. In other words, they can’t decide to skip class, Gordon said.

“Much like a teacher.” Gordon said, “they have to show up rain, sleet, snow