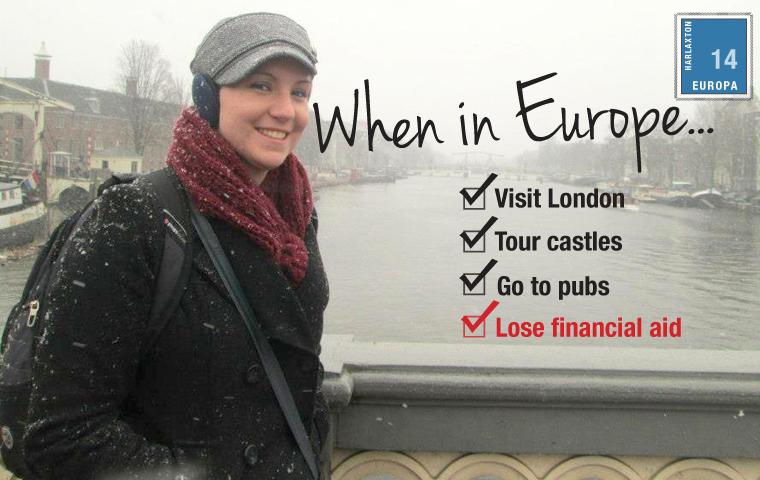 Junior Spanish and advertising double-major Leigh Larkin got to study abroad in Spain for two and a half months last summer.

In return, she lost all of her financial aid.

“The university doesn’t receive your transcripts until 90 days after you come back home,” Larkin said. “You can lose all of your financial aid before that time’s up – which I did.”

It has been a struggle between both her program and the university to get her grades translated, Larkin said.

“I still don’t have my financial aid,” she said. “The university got my grades a week ago.”

It’s not a smooth process, she said, and it has been almost three months since she returned.

“I’ve had to get on top of my program, get on top of the university, be really aggressive about these things,” Larkin said. “Otherwise it’s just kind of ‘whatever happens.'”

She has bounced from one office to another, but it has been a hassle, she said.

Still, she doesn’t regret the trip.

“Going abroad has opened so many doors,” Larkin said. “I work for the company I went with.”

Larkin said everyone should travel abroad.

Senior Shelby Spray experienced a similar situation when she returned from a semester abroad in England.

She lost part of her financial aid because the Center for International Programs lost her papers, she said.

“The U.S. government thought that I was on a very expensive four month vacation,” Spray said.

She said she was surprised when she got back, but the university helped her recover some of the costs. She said she had to talk to International Programs, the Bursar’s Office and Financial Aid, and it was a long process.

The government thought she left school, she said.

“I had to come back, reapply and basically beg, plead and anything else I could to have them reopen my accounts so I could get this money to come back to school for the fall,” Spray said. “That took most of the summer before last fall to get in and I didn’t get to register for classes until the week before school started.”

The radio and television major studied in England from Jan. 1, 2013 to the end of April. She compared her expenses to a semester at the University of Evansville.

“It actually kind of got scary expensive,” Spray said. “You pay the tuition cost for UE, so I can’t think of the number (off of) the top of my head, but it was kind of outrageous for a semester.”

Even though all of that happened, she had a great time, she said. She encourages everybody to study abroad, but to always make sure all of the paperwork is in order.

“I loved it. I very much still treasure all the memories there. I keep in touch with all the people that I met,” Spray said.

She said USI has gone above and beyond trying to help her.

Assistant Provost for International Programs and Services Heidi Gregori-Gahan said when students return to USI, the process that follows depends on what type of program they traveled with.

“It depends a little bit in terms of if it’s a USI course, it’d be one thing that would be handled a little bit differently,” Gregori-Gahan said. “If they’re going through another program through our office, then the courses and the grades come in on a transcript from another university.”

The process is longer for the students who go through a foreign university system, she said.

“We have to wait until that university processes the grades,” Gregori-Gahan said.

In some programs, the grades are sent to Washington D.C., where they are formatted into an “American style” transcript, and then they are sent to USI, she said.

“Either they didn’t get approvals for the things they needed before they left or it may have changed, so that also slows the process down,” she said. “Students panic a little bit and I don’t blame them.”

Financial Aid sends students a notification before the semester begins indicating aid is being withheld because the grades have not been posted, Gregori-Gahan said.

“It causes this big panic even though we know the grades are going to come in during the semester and their aid is going to be OK,” she said.

Students have to fill out an appeal form indicating the reason why their grades are not posted, Gregori-Gahan said.

“It’s kind of an automatic thing that happens with Financial Aid, she said. “But if they do that, then everything is fine.”

To avoid these situations, students should make sure to get all of their courses approved and all of the documents in order before they leave the foreign country, she said.

Even with these precautions, Gregori-Gahan said students still have to wait on the foreign universities to send grades to start the reintegration process.