Pets and families reunite with the help from Facebook page 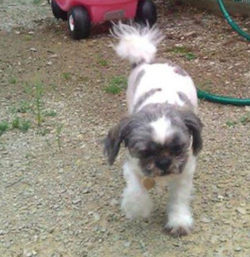 Brewski enjoys running around in circles, playing and chasing birds.

He is known for being rather lazy and rarely lasts the entire trek when going on walks with his family and usually has them carry him home.

Brewski is Starla Kuper’s shih tzu and first “baby,” who has been a part of her family since her marriage five years ago.

Brewski went missing a few weeks after the Kupers moved into their new home.

“I was absolutely heartbroken that he was gone, so were my husband and daughter,” Kuper said. “It was like losing a family member.”

Unable to find him after scouring the neighborhood, a friend of Kuper informed her about Evansville Lost Pets, a Facebook page dedicated to reuniting owners with their missing animals.

“I felt bad when we did go to her house to get him back because her sons really liked Brewski. They were sad to give him back,” Kuper said. “They even changed his name to Baby Jesus.”

The night before Brewski’s escape, Kuper’s husband gave him a bath and had forgotten to put his collar back on, which listed their contact information.

“I know for a fact that Brewski would not have been found if I (had) never posted on Evansville Lost Pets,” she said.

Jennifer Nunning said she can relate to the pain of losing an animal and how terrifying it can be.

The USI occupational therapy assistant program instructor has two pets of her own and has come into contact with many people who have lost or found a pet through her years of work at Evansville Vanderburgh Animal Care and Control (EVACC).

“I am just passionate about animals – especially animals who need help,” she said.

Nunning began her work for EVACC as a volunteer taking photos for the website petfinder.com, which helps owners adopt found pets.

“I had been on Facebook for a while, and I thought, ‘Well, why don’t we try this and see if it works,’” she said. “There were people that were kind of nay-sayers and thought, ‘That wont work.’ I don’t know that I thought it would work, but it took about ten minutes to start a Facebook page.”

Her connections at EVACC and the Vanderburgh Humane Society (VHS) helped Nunning spread the word quickly through the animal-rescue community.

Nunning said her and Purcell spend many hours each day working on the page, but that it would be pointless without the page’s many followers.

“It’s like 9,000 plus people all working together to get these pets home,” she said. “That’s why it works- because it’s a community effort.”

She said Evansville Lost Pets also dedicates much of its time to educating people about the proper procedures to follow when rescuing or searching for a pet.

The page does not have its own set of rules but follows VHS and EVACC regulations.

Nunning said she encourages rescuers to use caution when returning pets because, although it seldom occurs, some people will claim pets having ill intentions.

“You can ask for pets’ records or a picture, or you can request to meet them at their vet’s office or animal control,” she said. “Don’t just turn over that dog if you don’t feel comfortable.”

Evansville Lost Pets has facilitated the rescue of roughly 3,000 lost pets with some reunitings occurring as quickly as seven minutes.