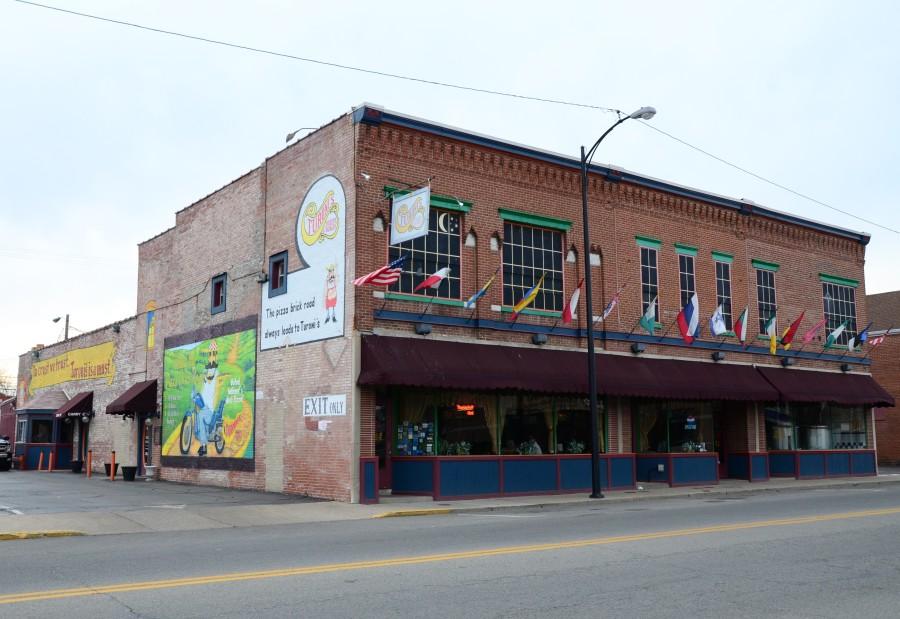 I sit at the bar at the Turoni’s on Main Street, antique pictures and memorabilia catch my gaze, especially the vintage beer memorabilia.

Will, the bartender, sits a Turoni’s Blue Eyed Moose India Pale Ale on the wooden bar table, its dark brown hue and hoppy aroma is inviting. As I take my first sip my eyes close and my taste buds are taken on a journey only craft beer can provide.

As I open my eyes, I’m confronted with Turoni’s vintage mystique, a metal Sterling Brewery sign in a corner serves as a reminder of a brewery in Evansville which ceased operations in the ’60s.

It leaves me wondering about Evansville brewing history and where Turoni’s microbrewery fits in.

Turoni’s Pizzery & Brewery was founded in 1963 and started as a pizza business. Its microbrewing operation came into fruition more recently, in 1996.

Turoni’s beer, which is exclusively brewed at the Turoni’s Main Street location, is part of a long history of beer brewed in Evansville, which pre-dates prohibition.

Jerry Turner, the pizzery’s president and founder, was inspired to produce his own beer for his pizza after visiting McGuire’s Irish Pub in Florida.

Faced with some skeptics who questioned pursing brewing, Turner didn’t hesitate and sent his son and son-in-law, who became the pizzery’s first brewers, to Blackhorse Brewery to learn the means to produce beer.

“McGuire’s set up impressed me,” Turner said. “I thought making our own beer with our own pizza would be a natural fit, so we invested in it. We’ve been brewing ever since.”

In 1996, Turoni’s and Evansville Brewing Company were the only microbreweries in the city until the brewing company closed in 1997 due to bankruptcy.

This left Turoni’s as Evansville’s only microbrewery until 2012 when Tin Man Brewing Company and Carson’s Brewery opened for business.

Unlike Tin Man and Carson’s, Turoni’s doesn’t distribute its beer to be sold in liquor stores or bars. Turoni’s beer can only be purchased on location.

This microbrewery style of operation is similar to how brewpubs across the nation and Europe operate, creating unique beer to be consumed only by their customers and accommodate to their tastes.

Billy Hannon has managed the Broad Ripple Brewpub,  Indiana’s longest operating microbrewery, for 13 years and said there are struggles to running a brewery which doesn’t distribute.

For Turoni’s, informing customers about its craft beer hasn’t been an issue due to the success of its pizza.

Turner, 71, doesn’t see distribution in the future as long as he’s around. He said, though, he’s close to retiring.

Whether Turoni’s decides to remain a non-distributing microbrewery depends on who is in control of the business in the future and what plans they have for the beer.

Two Men and a Microbrewery

Early on a Thursday morning in March, Jack Frey and Josh Pietrowski, the brewers who currently oversee the Turoni’s microbrewing brewing operation, stood in front of Turoni’s Main Street Pizzery & Brewery, a vintage building that has colors spanning shades of red.

Turner’s son and son-in-law were Turoni’s first brewers, but over the years, the responsibility of brewing beer has changed.

Like a grandfather who reminisces over pictures of each of his grandchildren, Pietrowski begins to recall the first beers that hooked him on craft beer and how beer can be a starting point for many relationships.

“People just want to come in on a Friday night or the night before Thanksgiving and order a large house special and drink Honey Blonde Ale, just like they used to as a family before the kids moved away,” Pietrowski said. “If used properly, beer is something that can be used to build great relationships within the community, and I think it’s really is a gift.”

Depending on the time of year, customers can find beers brewed specifically for the season.

Over the years, Turoni’s has traveled to different beer festivals and won awards and honors for its beer. It won honorable mention awards at one of America’s largest festivals, Great American Beer Festival.

Frey has been the head brewer since 2004 and was instrumental in the making of the Honey Blonde Ale.

“Everyone always asks us when we get to festivals if we’ve brought pizza with us,” Frey said. “We’ve got that kind of name recognition, kind of like how if you’re (from around here) you know Turoni’s and the pizza.”

Drinking craft beer at Turoni’s Main Street has its perks that other microbreweries can lose due to the distributing process – drinking beer straight from the source, practically unmoved.

“For places that brew at their establishment, you’re drinking beer that is as good as it possibly could be. It couldn’t be any fresher and that’s because you’re drinking it right out of the tank,” Hannon said. “As careful as you can be with your beer, having to move it from one place to another – there’s always the risk that it warms up, cools down, warms up, cools down and gets bounced around.”

For Frey and Pietrowski, brewing is about making all kinds of good beer people can enjoy.

“I want people to know that year round they can come in and have a house special and a Honey Blonde and it’s going to make their Friday night – the way it used to make mine before I started working here,” Pietrowski said.