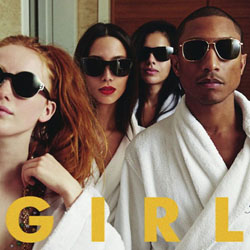 Pharrell Williams had a good year in 2013.

The longtime R&B singer-songwriter and music producer was able to revitalize his career with the success of billboard hits “Get Lucky” by Daft Punk and “Blurred Lines” by Robin Thicke, both of which he made guest appearances on.

These songs seemed to rival one another thematically, as well as sonically, instigating a return to the retro funkiness of 1970s R&B and funk music.

But more importantly, for Pharrell, both of these songs were infectiously catchy.

So when I heard he was releasing a new album this year, I was expecting the same level of radio-friendliness.

A couple days ago, I heard the song “Happy” for the first time.

It fit the mold of what I had in mind, but left more to be desired—capturing the sound and production quality of his other 2013 hits, but lacking in terms of its accessibility.

I figured maybe the song was his “safe” song on the album and the rest of the album would make up for it.

This was not the case.

In fact, “Happy” is about the only song I can really get into on the entire album because nothing else works for me at all.

“Marilyn Monroe” feels like an outdated tribute to early Usher, mixed in with some boy band influence – a.k.a. the bad kind of R&B – which pairs nicely with “Brand New,” a duet with former N’Sync front man, Justin Timberlake, that is all over the place in terms of structure.

“Gust of Wind,” featuring Daft Punk, pales in comparison to “Get Lucky” in just about every way imaginable, and the album’s second single, “Come Get It Babe,” featuring Miley Cyrus, manages to be both a rip-off of Robin Thicke’s “Blurred Lines” and one of the least-catchy and most cringe-worthy songs on “G I R L.”

As his career peaked in 2013, maybe Pharrell should have considered retiring. Because it’s all-down-hill from here.