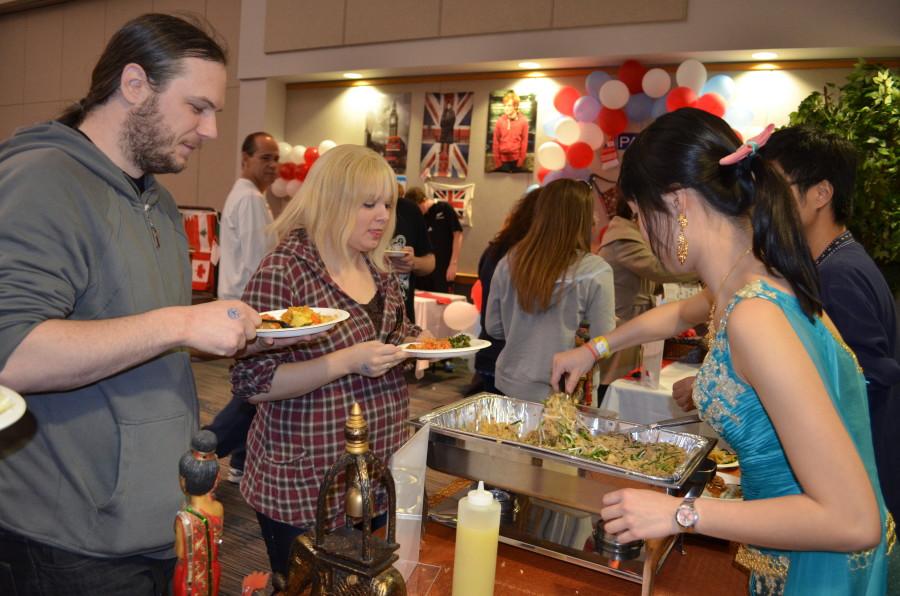 Those who put on the food expo can say they served hundreds Friday. The International Food Expo sold all of its 500 tickets to students, faculty and even some of the Evansville community members during the annual event.

With food selections from 25 countries, singing and dancing from around the world, Carter Hall stayed packed during the expo.

“I was curious to see all the countries presenting their dishes,” German exchange student Andrea Loppenberg said. “I wanted to show my dish because a lot of Americans think we just eat sauerkraut and drink beer, which is kind of true, but we have a lot of other stuff, too.”

Loppenberg, along with the rest of the German representatives, served käsespätzle, which is essentially a noodle, cheese and onion casserole.

Loppenberg said it was an easy, popular dish she learned how to make from a fellow German student. Although the variety of food grabbed most of the hungry guests’s attention, many eyes were focused on host Adam Haskins and the performances that took center stage.

“I have a lot of experience with theatre performance, so I am comfortable in front of an audience,” Haskins said. “I am also really good friends with Giselle Fernandez (International Club member), so when she asked, I immediately said yes.”

Performances introduced by Haskins included a Japanese Ocarina performance, a fashion show, a Haitian drum performance and dances from Jamaica, Japan and Brazil. Despite all of the action happening on stage, Haskins still said the best part of the International Food Expo is the food itself.

“I am actually a vegetarian, except for one day out of the year and that day is the day of the food expo,” Haskins said.

Although most of the performances were planned, some impromptu singing and dancing took place on stage. The DJ played different popular songs from each country, causing the natives to take to the stage to show how their culture gets down on the weekends.

One performance that stole the hearts of the female audience was by Fernando Veronez, a Brazilian exchange student, with an impromptu performance of “When I Was Your Man” by Bruno Mars.

“A girl just asked ‘Can you sing to me?’ and I just said ‘OK. I can try!’” Fernando said. “I have to be honest with you. I did mess up a few of the words in English because I do not speak it, but I still tried. It was for fun.”

Fernando said getting up and singing in front of people is easy, simply because he is from Brazil and that’s what he does. Behind the fun and games of the expo, however, is an incredible amount of work.

Students and faculty involved put countless hours of work into every aspect of the event.

“Before the fall semester even ends, the officers meet together to kind of go over which countries will be involved, deadlines to set for when to turn recipes in, work with Sodexo to get that organized because they meet with the chefs, set deadlines for volunteers, and get entertainment ready to go. All before this day even happens,” said Nicole Vernon, adviser to the International Club.

Vernon has been involved with the expo for six years now and said all the hard work paid off this year.

“Just looking at them (the students), and seeing how excited they are to show some part of their culture and country here, is what makes it worth it,” she said.