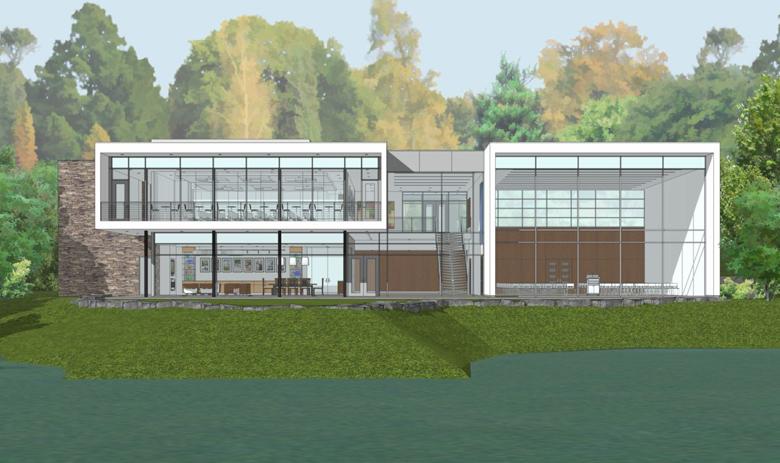 The west side of Reflection Lake will soon be home to a 13,800-square-foot Conference Center and an 80 to 90 car parking lot.

A private donor paid for the $5 million facility.

“We’re calling it the Conference Center,” said Stephen Helfrich, director of facility operations and planning. “Maybe once it’s completed, it will have more of a formal name.”

“In the Great Hall, which is the largest room, there will be seating for approximately 150 people for luncheons, dinners and special presentations,” he said. “There will be another room that can be used as one large space or divided in half, much like Carter Hall.”

The Center will face campus and have a terrace overlooking the lake.

“It’s a great location to be able to have a conference and be able to look across the lake and the campus,” Helfrich said. “It really is a good use of the area.”

He said they plan to deal with the removal of trees to the best of their ability, even though the construction is in a mostly wooded area.

“We want to do our job without disturbing the natural look of campus,” Helfrich said. “They will be removing quite a few trees, but also remaining a buffer between the Conference Center and the neighbors to the west. We want to minimize the effect on the neighborhood and leave as many trees as we can.”

He said he wants to build the building as close to the water as they can.

“There is a really rustic nature trail and I would like to keep that intact as much as possible,” Helfrich said. “The terrain is really neat with the hills and ravines.”

Students will definitely benefit from the Conference Center, he said.

“Students will be allowed to rent out the space,” Helfrich said.

Scheduling Services will be used for reservations, as it is for any other conference room.

The university is waiting on a few approvals before taking action.

“We should be ready to start construction sometime in the summer of 2014,” Helfrich said. “It will probably take about 15 months to build and if started on time, we could be finished toward the end of the fall to winter of 2015.”

Helfrich said the construction of the Center shouldn’t affect students at all.

“We will be making improvements to the road across the lake, but even then that’s minimal impact to the students,” he said.

Brandon Field said he wants to give his students hands on experience with the new addition to campus.

He said classroom learning is more sterile than real-life experience and this isn’t the first time he has gotten his students involved.

“We’ve done several other class projects with building projects in previous years, including having them look for energy rebates that the Business and Engineering Center and the University Center Expansion project qualified for,” Field said. “We worked on a project that designed electrical generators on exercise equipment at the Rec and Fitness Center.”

Adam Simmons disagrees with the location of the new center.

“The view of Reflection Lake is a big draw to both the Business and Liberal Arts buildings,” said the senior advertising major. “The woods add to the view and we have excellent location near the back parking lot near the new Applied Engineering Center.”